Here, with only a day or two to spare, is your Twin Cities fine dining report for March. This time we dined at Piccolo and did not have to endure terrible road conditions on the way there or back. And it was a very good dinner, always interesting, sometimes great.

A few quick notes on the restaurant for those who haven’t been there. It opened a few years ago and is housed in a very small/intimate space. There are two small dining rooms–one larger and brighter (and warmer) as you enter, and a smaller one with just three tables on the other side of the kitchen, which you pass through on the way there. The space in a sense prepares you for the food: small rooms, small plates; close quarters, fussy attention to detail; unusual layout, highly creative cooking. The menu, which changes every eight weeks or so, comprises five courses with only three selections in each, and while you can order a la carte, the smart thing to do is to order all five courses for the set price of $55. As we are smart that is what we did. More on what we ate in just a bit.

Let me say first that this was the most interesting meal we’ve had in the Twin Cities so far and the one that most successfully married intellectual and elemental pleasures. The caveat, of course, is that we have not yet been to Travail and are not likely to visit any time soon, given their constraints (no reservations) and ours (small children, babysitters on the clock). Doug Flicker’s food at Piccolo, however, is not gonzo-theatrical or clever for its own sake as Travail’s often appears to me to be from what I read and hear (yes, yes, I know it’s completely unfair to opine on a restaurant I have not eaten at, and you should completely disregard this). You get the sense that you are in the hands of a chef who is not so much excitedly demonstrating what he can do with innovative technique or unusual combinations of ingredients as he is pursuing a clear vision. If I make it sound a little too cold and bloodless, well, that might be my criticism of a couple of things we ate but I want to stress again that, on the whole, this was an exciting and soulful meal.

On to what we ate (it was just the two of us, but given the concise menu we effectively ate two thirds of it)—please click on an image to launch a larger slideshow with detailed descriptions:

Don’t you hate assholes who post pictures of bread and butter? Anyway, both were very good as was the dehydrated olive oil “powder”, which showed up later as well. 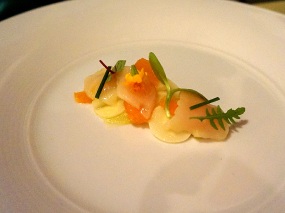 Cured sea scallops with cara cara oranges, hearts of palm and herbs. This was the missus’ first course. Nicely conceived but as was the case with a similar dish at Borough, the scallops themselves were a bit of a weak link, losing too much of their sweetness in the cure. Still this did far more with fewer ingredients than were on the plate at Borough.

Cream of salsify soup with parsnip, veal tongue, maple and onion. It seems to be the new black to bring bowls to the table with fussily arranged things in them and then pour soup or broth around and over them. 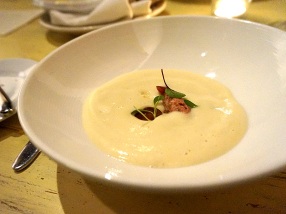 Also, salsify soup seems to be a thing. I had some at Alma in January. This was better. The soup was more thickened froth than creamy but everything worked really well even after the pretty things drowned in it. The interplay between the unctuous soup, the minerally tongue and the sweetness of the maple was quite lovely.

‘Ndjua agnolotti with tete de porc, warm potato and mushroom broth. This was my second course. The head cheese and the potato and the mushroom broth were fine but the ‘Ndjua in the agnolotti was a little overpowering given the portion size. Where’s the broth you ask? 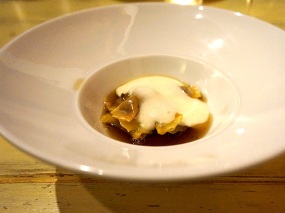 Yes, it was poured over. I don’t know if Chef Flicker is a crazed perfectionist but if so I hope not to get anyone into trouble by posting a picture of this slight presentation fail. 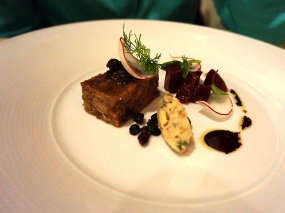 Oxtail terrine with roasted beets, smoked bone marrow, shaved radish and currants. This was the missus’ second course. This was the one dish that felt more precise than satisfying, which is not what you’re expecting from a dish starring oxtail and bone marrow. Who knows, maybe that’s the point but it didn’t do it for us.

Day boat swordfish with Manila clams, Meyer lemon, buckwheat groats and horseradish. This was the missus’ third course. The swordfish is poached in olive oil and then charred. You’ll never believe it but… 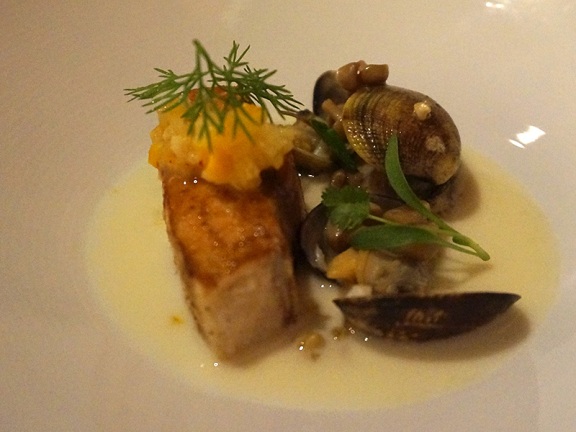 …there’s a little soup/sauce that’s poured around this as well. Three times in quick succession in one meal is perhaps once or twice too many. Still, this was very good where it counted: in the mouth.

Monkfish with roasted cauliflower, sweetbreads, black olives and truffle. This was mine. The monkfish was draped with caul fat (presumably pork) and sauteed. I think it might have gone just a little bit over. Most everything else on the plate was great and worked well with the fish, but I was not crazy about the olive puree. It was meant to provide a robust contrast to the rest, I’d guess, but whatever the intention it was too one-dimensional and threw off the balance of the dish.

Duck with salsify, gruyere, duck gizzard ragout and pinecone syrup. This was my last savoury course. Wonderfully conceived with not a gratuitous thing on the plate. The duck as presented though was a bit too chewy (just a bit). The pinecone syrup was a lovely touch. 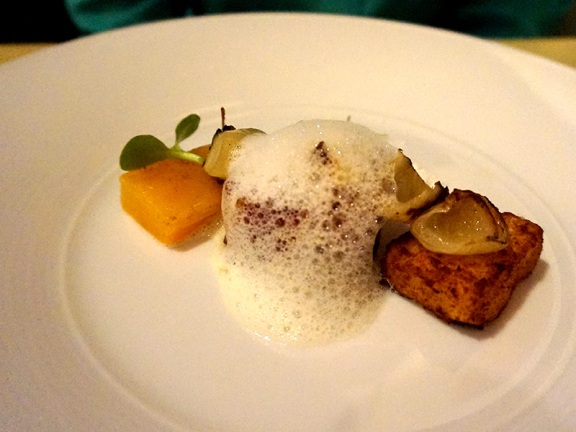 Veal short ribs with rutabaga, cipollini onions, semolina and almond milk. I’ve been waiting a long time for foams to yield their place on the fine dining stage to some new craze and I’m afraid the appearance of this almond milk foam did little to change my mind–why it seems appealing to chefs to send out plates that look like some tired geezer spat all over them I don’t know. That appetizing image aside, this was rather good and heartwarming. The veal was cooked sous vide and then browned a little on the griddle. 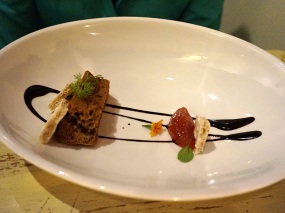 Hazelnut chocolate torte with quince, meringue and tarragon. This did not look terribly promising when it came out but was very good (despite being gluten free). Looked dry but was very rich.

All this plus three glasses of wine, tax and tip came to $173.

And finally a view of part of the second, smaller dining room in the rear that we were in. It’s less cramped than the main room with only three tables but I’m not sure about the aesthetic. The desk is a little too cutesy and between it and the wine refrigerator that part of the room just felt too cluttered. Also, it was a little chilly in there. Still, on the whole, I think I preferred being in there to being seated at some of the tables in the main dining room which are really close to each other. It’s certainly a quirky space.

Well, what remains to be said? The service was very good–warm without being over familiar, professional without being mechanical. And my highly rational hatred of foams and the few missteps aside, this was an excellent meal. Unfortunately, you are not going to have very many opportunities to eat it as I’m told they will have a new menu starting on Monday. That’s really the big problem with this sort of approach: each menu doesn’t have enough on it to make you want to come back soon, but when you do you’re not likely to find anything at all that you liked the last time around. That said, we’ll be back sooner rather than later. I’m very interested to see what Chef Flicker can do when he’s not constrained by trying to cook seasonally during winter in Minnesota. And on the evidence of this meal it’s very surprising to see that he was not selected as a finalist for the region for this year’s James Beard awards. This place is working at a level of ambition and focus that we just haven’t seen around town.