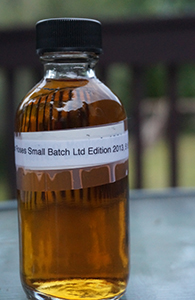 I have previously reviewed the 2010 and 2012 releases of Four Roses’ annual limited edition release of their Small Batch series. The 2012 release was one of the most lauded bourbons of that year and this edition, commemorating the 125th anniversary of the distillery, debuted to no less acclaim. It was also much harder to obtain. I found the 2012 edition on the shelf of a store I wandered into looking for something else, and there were many bottles still on the shelf when I left with mine. For the 2013 release, however, you had to promise your firstborn child just to get on a list for a raffle and as ours was already fully toilet-trained and sleeping through the night it didn’t seem like a good deal. As bourbon in any case is not really my major obsession in the world of whisky, and as I am inordinately lazy, I was only too happy to leave the chase to those with more energy and desire (I haven’t even bothered to look around for the 2014). Fortunately, thanks to a sample swap I get to taste it anyway.

I’m not sure what the mashbill for this release was but doubtless someone will soon chime in in the comments with the details.

Nose: Rich caramel with a touch of orange peel and light maple syrup, and a fair bit of polished oak. Quite a bit of rye too under all of that. Gets sweeter as it sits, with more vanilla, but I think it’s still drier than I remember the 2012 being. With more time the caramel subsides a bit, letting more of the orange peel come through along with some honey. Gets fruitier with water, with some apricot joining the orange (which goes from peel to marmalade). A faint hint of mocha too now.

Palate: The oak and the sweetness arrive together; the sweetness expands first and then as I swallow the oak comes to the top. Lovely soft mouthfeel and perfectly drinkable at full strength. On subsequent sips the citrus speaks more loudly but it’s closer to lemon than orange here; more rye too now. With a lot of time it gets much brighter and more acidic and the rye notes (pine, mint) get more pronounced still. Water darkens it back up again with hints of chocolate edging into bitter oak. A little dusty too now.

Finish: Long. No new flavours emerge but everything that was on the nose and palate takes a turn at the mic, with the rye and the oak vying for the last word. As on the palate with water.

Comments: An ode to balance. I think I liked it better with water. A lovely bourbon indeed but, as good as the nose is, on the palate I think it falls just short of the highs of the 2012. Then again I drank most of a bottle of that and only 2 ounces of this one.

Thanks to Sku for the sample (and for continuing to share bourbons and ryes which I’m sure a number of people would say are wasted on one such as me)!