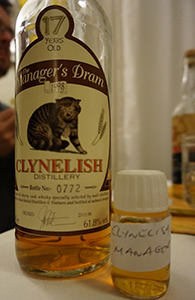 Back in September there was a mini-gathering in St. Paul to celebrate my friend Rich’s birthday. Everybody brought a few special whiskies to share. I have to say these gatherings that Rich organizes every once in a while can be somewhat over the top. The whiskies brought to this tasting, for instance, included the Ardbeg Provenance and the Brora 35, 2013, as well as a couple of Talisker 30s, a Karuizawa and an exquisite, old indie sherried Caol Ila. I should add that despite the quality of whiskies on the table these are very laid back occasions; whether in smaller groups—as on this occasion—or in larger ones, you’d be hard-pressed to find a less pretentious group of whisky geeks. At the end of the evening there was some frenzied sample-swapping (which I may have had something to do with instigating) and I came away with a bunch of samples, large and small, of some very good whiskies, and also the 2014 Ardbeg Supernova. It’s also testament to the mellowness and character of the group that no one demurs when it comes to sharing prized and irreplaceable (not to mention some rather expensive) malts.

Anyway, this Clynelish 17 from the legendary Manager’s Dram series (inaugurated by Diageo’s previous incarnation DCL) was one of my very favourites on the night, and I think that was true for most of us. The Manager’s Dram bottles were bottled from the late 1980s through early 2000s and were drawn from casks selected by distillery managers, for the staff only (this one was bottled in 1998); they were not sold directly to the public though bottles inevitably emerged on the secondary market. This is not the same series as the Manager’s Choice which came out in the late 2000s for sale to the general public and enraged a lot of whisky geeks with extortionate prices for not very old whisky (which is not to say that the Manager’s Dram bottles don’t cost an arm and a leg now too).

I have to admit this is a slightly smaller sample (about 25 ml) than I say I will review from in my protocols. But I have tried it before and know from that experience that while I would want to have far more than 25 ml of it to drink, it’s more than expressive enough to draw detailed notes from even at that smaller size.

Nose: Nutty at first with dusty wood peeping through. Then the fruit starts emerging (plum sauce, apricot jam) along with some honey and slightly savoury notes (ham) and slowly expanding brine. Gets a little gingery too, but it’s candied ginger, and not the powdered ginger I get in much younger whiskies from overactive wood. The fruit expands (some dried orange peel in there too now) and it gets richer with time but I know water really puts it over the top. (Let’s take a couple of small sips first.) Ah yes, with water the fruit expands and now there’s some toffee and marmalade and even more honey and some honeycomb to go with it; some brown butter too.

Palate: Very hot but the plum sauce is here along with a lot of polished wood and citrus (somewhere between orange peel and meyer lemon) and a bit of fried plantain. Even more citrus on the second sip, but, yes, this is wasted without water. With water it’s just as on the nose: fruit (more citrussy here), honey, honeycomb, light toffee; some wood to brace it all.

Finish: Long. Neat, it stays pretty tight with the wood the strongest note and the salt just behind. With water the fruit expands long into the finish (apricot jam, marmalade, lemon peel) and the wood gets spicier. Not as much salt now.

Comments: This is no sherry bomb—the Clynelish character is front and center. I’m guessing this was a refill sherry cask from American oak. Just lovely stuff. Some might say that this is proof that age does not matter (this is better than many high-quality older single casks of similar profile) but please don’t forget a) that in this day and age 17 years old is getting to be positively ancient and b) that most 17 yo casks aren’t this good.

Thanks to Pat for sharing it twice!

One thought on “Clynelish 17, Manager’s Dram”