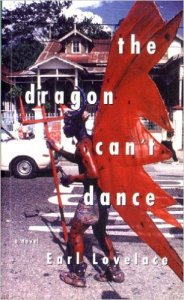 Early in the year I’d threatened that in 2016 I would be further testing the patience of my core whisky readership—who are already suffering through a steady diet of recipes and restaurant reviews—with posts on literature. Here now is the first one, on the Trinidadian writer, Earl Lovelace, which will seek to convince you to purchase and read his novels, The Dragon Can’t Dance (1979) and Salt (1996).

Odds are that if you’re not from the Caribbean, or do not teach or study fiction by writers from the Caribbean, you will not be familiar with Earl Lovelace. And given the fame of writers such as V.S Naipaul (also originally from Trinidad—though it’s hard to say where he’s from now) or Jamaica Kincaid or Edwidge Danticat or, more recently, Marlon James, Lovelace’s lack of name recognition may seem to tell its own story. After all, in the era of globally available literature, and with the logic of the free market seemingly internalized everywhere, it is easy to believe that availability and name-recognition are linked to “quality”. Surely if a writer from the Caribbean and her books were worth reading they would be nominated for the Booker Prize or receive mass market publishing contracts and “rise” to the top of our consciousness.

The truth, of course, is quite different. Awards like the Booker Prize, and the larger publishing system for which they could be seen as a metonym, have their own self-confirming criteria. And the question of what will be of interest to a larger international market is based in an arcane calculus that seems to have little relationship to the reality of actual international readers—or so I assume based on the fact that my American students usually are able “connect” as easily with fiction written by relatively obscure Indian and Caribbean writers as with that by many whose names are far more recognizable or lauded.

Lovelace’s case is more curious in that his opus, Salt won the 1997 Commonwealth Writers’ Best Book Prize. Now you’re probably wondering what the Commonwealth Writers’ Best Book Prize is—don’t worry, it was only inaugurated in 1987 and was discontinued in 2013, presumably after those involved acknowledged that it was essentially a shadow-Booker Prize. But a lot of big names did get nominated for and win that prize in their time: Rohinton Mistry (twice: for A Fine Balance and Such a Long Journey); Vikram Seth (for A Suitable Boy); Coetzee (for Disgrace); Peter Carey (also twice: for Jack Maggs and True History of the Kelly Gang); and so on. So you’d think winning that prize would draw the attention of the big publishers. Well, maybe it’s because he took almost 15 years to put out his next novel, Is Just a Movie (2011), but the award didn’t make Lovelace or Salt household names. Salt (and The Dragon Can’t Dance and Is Just a Movie) are available in the US from Karen and Michael Braziller’s estimable Persea Books imprint, which has an excellent list but doesn’t exactly have the marketing budget of Penguin Books (one of whose imprints put out Marlon James’ Booker-winning A Brief History of Seven Killings).

Anyway, I’ve come some distance in this post without yet giving you any good reason to read Lovelace and it’s time I got to that. And I don’t want to give the impression that there’s some kind of publishing conspiracy that’s kept him from the big time: I just want to (re)affirm the fact that there is a lot of excellent writing out there that doesn’t get as much attention as it deserves. Some work to seek it out will be well-rewarded: I, for my part, will try to do a little bit from time to time to draw your attention to some of these writers from South Asia, the Caribbean and Africa.

So, why should you read Lovelace? Well, there’s his language, supple and musical in its rhythms, often stretching out into long sentences and paragraphs that are hard to graph (and their trajectories hard to predict). There’s the fact that his language, his sentences and paragraphs, bring together the worlds and stories of multiple characters and the places they inhabit (either in reality or in longing) and the histories they emerge from or seek to enter or escape, insisting on a connected world and opening up an image of deferred wholeness that his characters are not able to achieve in their present. He offers no panaceas for the messy present and pasts of the Trinidad he represents in his fiction: his eye is as clear as that of his famous contemporary, Naipaul, but his vision is far less bleak and punishing. In fact, it’s tempting to posit Lovelace as the anti-Naipaul. “Nothing was created in the West Indies,” wrote Naipaul, not too long after making his reputation in England; Lovelace, who lives in Trinidad, insists on creativity as central to Trinidadian self-fashioning, particularly in The Dragon Can’t Dance  through the forms of calypso and carnival, and in Salt through the power of story itself.

The two novels are quite different from each other. The Dragon Can’t Dance is the composite story of the neighbourhood of Calvary Hill (the Hill to its residents), moving between the narratives of a large cast of characters near the bottom of Trinidadian society and their performance of identity (quite literally in the case of carnival, with its masks and costumes). Salt, on the other hand, focuses primarily on two characters, Alford George, an anglicized teacher who (in an echo of Naipaul’s The Mimic Men) enters into the world of electoral politics, and Bango, an old stickfighter and toyseller (among other things) who holds within himself a story that stretches from slavery to the present, a continuity that escapes Alford George: a story, without whose telling, Lovelace implies, there can be no moving forward. The Dragon Can’t Dance  can be read in multiple sessions; Salt probably best rewards a long immersive session or two.

I don’t mean, by the way, to suggest that there is nothing to criticize in Lovelace’s books. The problem with the novels, though this is less pronounced in Salt, is their privileging of male perspectives: even where Lovelace shows us his male protagonists’ failures to see and recognize the fullness of the women in their lives, he tends to identify the nation and community’s story with the strivings of these men. But he is no Naipaul, with his fear and horror of women, and there is much else to recommend in his books.

Perhaps the best way to persuade you to read Earl Lovelace is to give you a little sampling of Earl Lovelace. I’m not sure that there are very many writers who have written better opening paragraphs than those that open these two books. In the case of The Dragon Can’t Dance it is really the entire opening chapter that is a tour de force that establishes setting, language and feeling. But I am going to give you only the opening paragraph (which, by the way, rewrites an incident from Naipaul’s early masterpiece, Miguel Street):

This is the hill tall above the city where Taffy, a man who say he is Christ, put himself up on a cross one burning midday and say to his followers: ‘Crucify me! Let me die for my people. Stone me with stones as you stone Jesus, I will love you still.’ And when they start to stone him in truth he get vex and start to cuss: ‘Get me down! Get me down!’ he say. ‘Let every sinnerman bear his own blasted burden; who is I to die for people who ain’t have sense enough to know that they can’t pelt a man with big stones when so much little pebbles lying on the ground.

And here is the opening paragraph/sentence of Salt:

Two months after they hanged his brother Gregoire, king of the Dreadnoughts band, and Louis and Nanton and Man Man, the other three leaders of African secret societies, who Hislop the governor claimed to be ringleaders of an insurrection that had a plan, according to the testimony of a mad white woman, to use the cover of the festivities of Christmas day to massacre the white and free coloured people of the island, Jo-Jo’s great-grandfather, Guinea John, with his black jacket on and a price of two hundred pounds sterling on his head, made his way to the East Coast, mounted the cliff at Manzanilla, put two corn cobs under his armpits and flew away to Africa, taking with him the mysteries of levitation and flight, leaving the rest of his family still in captivity mourning over his selfishness, everybody putting in their mouth and saying, ‘You see! You see! That is why Black-people children doomed to suffer: their own parents refuse to pass on the knowledge that they know to them.’

How can you resist? Why should you?

The links in the book titles above are through my Amazon Associates account and will earn me small commissions should you make the purchases (I put these towards the cost of running this blog). Of course, if you have an independent bookstore in your town I would highly recommend asking them if they can order these books for you instead (if they don’t already carry them). In my own town I highly recommend the excellent Con.Tent (full disclosure: the owners are friends, and also members of my local whisky group).