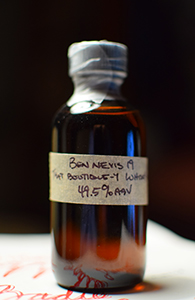 That Boutiquey Whisky Company is a line of whiskies released by Master of Malt, the UK whisky store best known for not being the Whisky Exchange but seemingly desperately wanting to be. Take for example, this series, in 500 ml bottles, that launched after TWE’s 500 ml Elements of Islay series. The TBWC malts, however, are not limited to Islay and have labels as colourful (or garish, if you prefer) as those of Elements of Islay are minimalist. It’s a campier look, which is not necessarily a bad thing, but the problem is that reviewers I trust rarely seem to have overmuch praise for what’s in TBWC’s bottles. That used to generally also be true of Ben Nevis, though its previously dodgy reputation seems to be on the rise of late. I’m on record as saying that Ben Nevis, especially from sherry casks, may well be the next big thing among whisky geeks. It’s certainly true that well-aged, independent, sherried Ben Nevis can still be found at reasonable prices. I’m not sure if this one was reasonably priced though—these TBWC releases are usually priced pretty high as well. Anyway, let’s see what this is like. At least it’s not NAS as many of their earlier releases were (and, to be fair, as every single Elements of Islay release has been).

This was bottled in 2016 and is the fourth batch of Ben Nevis they’ve bottled—and, as per Whiskybase, is the first with an age statement. As far as I can make out, 2016 is the year when they started putting ages on their labels—please correct me if I’m wrong.

Nose: Spirity and solventy at first and then acidic fruit begins to appear (lime, dragonfruit) with muskier fruit trailing in their wake (melon, a hint of green banana). The raw notes persist for a while. Not a whole lot of obvious sherry character. With time there’s some paraffin and also some plastic. The fruity notes become more and more artificial. Can water rescue this? Yes, a bit: more peppery and more of the paraffin and less of the plastic and artificial notes. Still a little spirity though.

Palate: Less spirity to start here, thankfully, and the fruit is more present (and more tropical with some ripe pineapple) along with some pine and other slightly bitter, resinous notes. A hint of rubber too (just a bit; think scented erasers). Quite hot despite the (relatively) low strength. With time the soapy quality from the finish starts showing up earlier and, as on the nose, the fruity notes get more and more artificial. Water pushes back the soap and the artificial/scented eraser notes here too.

Finish: Medium-long. Gets more peppery as it goes and, alas, there’s a soapy note that emerges as well.

Comments: Not the best Ben Nevis I’ve had—the frustrating thing is that the notes I like in the better sherried Ben Nevises I’ve had are palpable here but are muddied by less attractive notes (plastic, soap, rubber). Ah well, it’s not undrinkable by any means and it’s better with water.