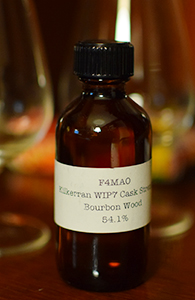 I think the seventh release was the last of Kilkerran’s Work in Progress series. As with the previous couple of Work in Progress releases it came in both “Bourbon Wood” and “Sherry Wood” incarnations. However, this bourbon wood version was released at cask strength. I think by this point these releases were at 10 years old, give or take a year—someone will be along to confirm shortly. I don’t know if there’s a reason why this, of all the WIP releases, was bottled at cask strength (or why the companion sherry wood wasn’t). The regular release 12 yo that followed it this year is at the 46% of all the other Work in Progress releases. Anyway, I quite liked the bourbon cask Work in Progress 6, which I reviewed earlier this month (and which I tasted right before this one) and am looking forward to reviewing the regular 12 yo next month: let’s get this intervening release out of the way first.

Kilkerran Work in Progress 7, Bourbon Wood (54.1%; from a sample from a friend)

Nose: Peppery, minerally peat, just like in the WIP 6, and some of the putty too (but no plastic)—but it’s generally more closed. More spirity too on the second sniff but this passes quickly, replaced quickly by lime zest and wet stones. With more time there’s a touch of vanilla and cream. With water the lime turns to citronella and the vanilla expands as well.

Palate: A big hit of lime and lime zest with some peppery peat around the edges but it’s not as peaty as the previous edition. Lovely, oily mouthfeel. A bit sweeter on the second sip but this is all about the lime and (white) pepper. Very approachable at full strength. With more time it gets quite sooty and there’s some salt too now. Mellower with water, a little sweeter maybe.

Finish: Long. The lime is more zesty here and keeps expanding, bringing the peppery peat with it. With time and water the sweeter notes hang around into the finish.

Comments: This is clearly a sibling of the WIP 6 but it’s not particularly Longrow’ish. And rather than Talisker it brings to mind Clynelish (if it were more highly peated). These are my associations—they may seem idiosyncratic or wrong-headed to you (I accept your apology). Even though this is in some ways a simpler malt than the previous edition—if that one was austere, this one is close to one-note—I like this even more. It’s a perfectly focused malt, and if this style does it for you you will love this (though I have no idea if it is still available).