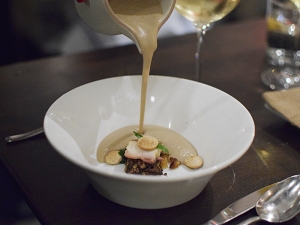 After a long run of reviews of more affordable places in the Twin Cities metro area, here is a review of a recent dinner at one of the top contenders to be the Twin Cities’ best fine dining restaurant: Spoon and Stable. We enjoyed our first dinner there in late 2015, less than a year after they opened, and had always meant to go back soon for another meal. However, more than three years past their opening they remain a difficult reservation and so it took almost 2.5 years for us to finally get back (I don’t mean to suggest that we were trying to get a table every month after that first meal). I guess it’s a positive development that we were able to get in on a Friday this time—but even booking a month ahead, the best we could do was 9.15. Anyway, this dinner was as good as the first in some ways, lesser and better in others.

I will open with a bit of a Frozen North complaint. We dined there this past Friday, a day after some significant snowfall. It would have been nice if the restaurant had paid to clear the snow and slushy ice piled high well past the sidewalk in front. Not an issue for those partaking of the valet parking but not easy to negotiate for people crossing the street after parking at a meter. Now that that’s out of the way, on to the food!

There were four of us dining. Our friends—who have accompanied us in the past to a number of meals in the cities—were happy to avoid ordering overlaps so we could try a lot of the menu, and so we did. We each got a first and main course; we shared a pasta and two side dishes between us; and each couple shared a dessert. As we had one non-drinker and one light drinker among us, we got a bunch of wines by the glass.

We were quite full at this point, so opted to split a couple of desserts. If you look at my previous review you’ll see we were not convinced by the desserts on that occasion. I am happy to say we liked these better.

For pictures of the restaurant and the food, please launch the slideshow (and please forgive the quality of the pictures: it’s a dark restaurant). For thoughts on service (not entirely positive) and price (some ambivalence here too), scroll down. 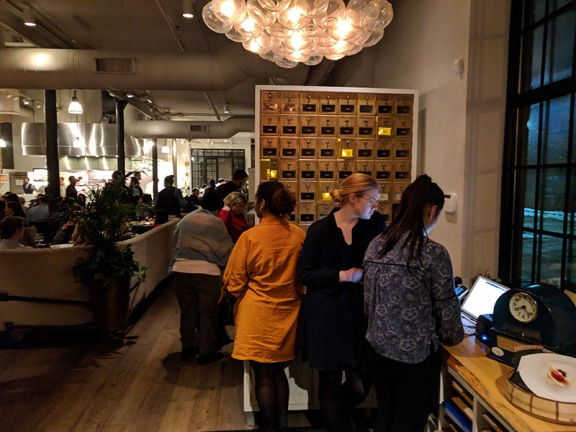 We couldn’t quite figure out if those little lockers behind the hostess stand are merely decorative or actually used for something. 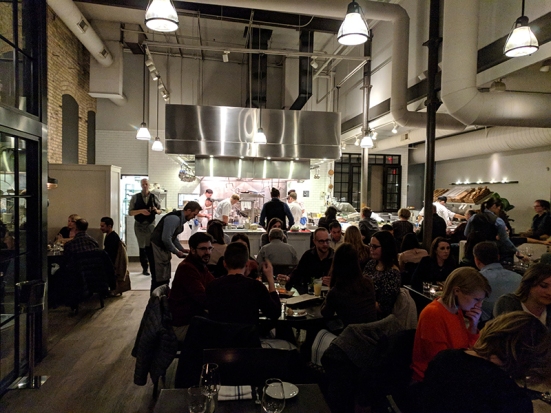 I confess I was never really very interested in the shtick of the restaurant’s name and so have no memory of why there are spoons on the wall.

The bread was very good but I’ll be damned if I know why it was presented on burlap. 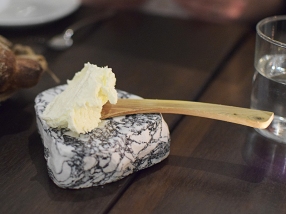 Or why the butter was presented on an ugly hunk of marble. 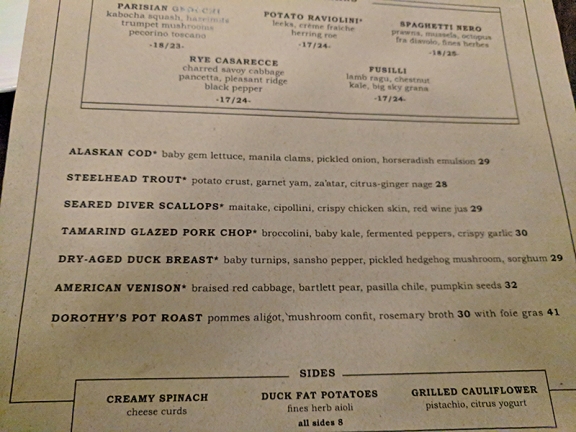 Presented as stuff in a bowl.

Then the soup is inevitably poured over the stuff in the bowl. 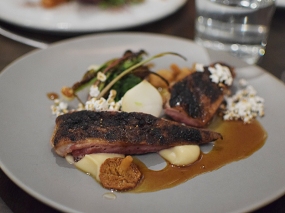 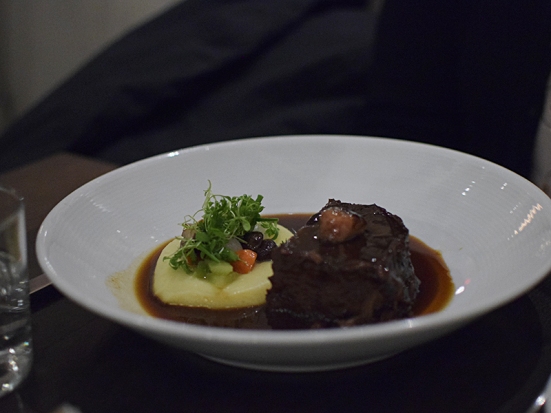 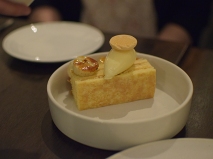 Yes, this had stuff poured over it too 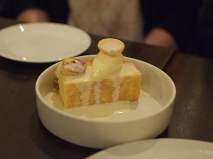 So, the service. It’s possible that our lead server was a bit exhausted at the second turn on a Friday night. He was professional enough on the whole but not particularly friendly nor communicative. The latter first evidenced itself when I asked about the nature of the tartare—he didn’t have a definitive answer but also clearly had no interest in finding out more and getting back to me. The bigger problem was with the duck. When I was ordering it he’d reiterated that it was medium rare and asked if that would be fine. But when it arrived it was closer to medium well. By the time I noticed this, everybody else had taken a bite and so it wasn’t like I wanted it replaced (I also don’t enjoy sitting waiting for replacement dishes while my companions eat around me). However, I did want to draw his attention to it and when I did, his response was rather odd: he would neither confirm nor deny my description of the duck as overcooked; instead he said, “I can take this back and show it to the chef if you like”. You can tell me if that’s an appropriate response at a restaurant vying to be the best in a city. At any rate, I didn’t want to make a fuss (it was my birthday dinner) and so I let it go. I was curious to see at the end of the meal if they might have made up for the duck by taking it off the bill or comping us wine or dessert, but no.

And the bill with five glasses of wine, tax and tip added on, came to just about $100/head. Which is both par for the course in the Twin Cities at restaurants of this genre/ambition and susceptible to the curse of Joe Beef. As I’ve noted before, my two meals at Joe Beef in Montreal make me very resentful of having to pay more for meals that are half as good in the Twin Cities. But the Twin Cities are a bit closer to us than Montreal and so we have to deal with it. That juxtaposition and the duck aside, we liked this meal more than our dinner at Alma in the fall, and with Piccolo lamentably gone, odds are good that we will be back here in less than another 2.5 years. Though at some point this year we’ll probably try to get to Tenant, the new incarnation of the Grand Cafe and Spoon and Stable’s sister restaurant, Bellecour as well. And we still have to track down Doug Flicker at his new place too.

Next week and next month on the food front: more affordable eats!

2 thoughts on “Spoon and Stable II”