After Wednesday’s review of the 2017 release of the Oban 14 (which I was just about whelmed by) here is my review of the 2017 release of the Oban Distillers Edition. As these—unlike the regular 14 yo—carry vintage statements, I am able to tell you that it was distilled in 2003. I have a bit of a spotty history with Diageo’s various Distillers Edition releases, which are basically the regular entry-level age-stated malt + a couple of months in various wine casks. Only the Lagavulin DE, which “finishes” the phenolic 16 yo in sweet PX casks, has consistently done it for me (here and here). I’ve previously also reviewed the 2011 release of the Talisker DE—I didn’t care for that one very much. In general, most of the Distillers Edition releases I’ve tried have seemed to drown the idiosyncratic qualities of the base malt in whatever wine cask the finish has been done in. In this case, the profile of the Oban 14 should theoretically be a good fit with the Montilla fino cask finish. Let’s see if that turns out to be the case. 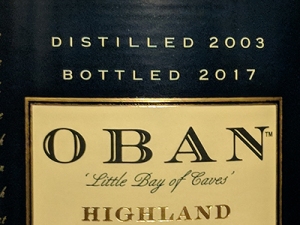 Oban Distillers Edition, 2017 Release (43%; finished in Montilla fino casks; from my own bottle)

Nose: It’s oddly blank at first and then a generic sherried quality appears, leafy and peppery and raisiny. Gets maltier as it sits, with milk chocolate and a bit of vanilla. With more time the citrus from the palate begins to show up here as well and there’s a bit of honey too. Water pulls out a bit more orange peel and also a slightly metallic note.

Palate: A similar story on the palate except with some sherry separation as I swallow. On the second sip there’s salt, some bitter oak extract, some cardboard and then some orange peel. Not much change here with time. Water pushes back the bitter oak but doesn’t bring out anything else. 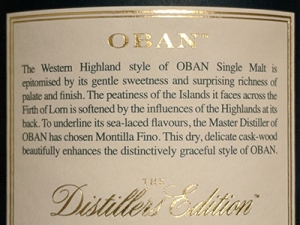 Finish: Medium. Gets saltier and spicier as it goes but otherwise there’s no development to speak of. Less salty and spicy with water.

Comments: This is pleasant but fairly generic sherried whisky—whatever is interesting about the regular 14 yo is sanded down to a sherried mean by the finish. No major flaws, and drinkable enough, but also absolutely nothing to recommend it. Anything you like about this you can find in a cheaper, more interesting whisky. In fact, in some ways it seems to have less in common with the Oban 14 than with the Clynelish 14, which this tastes like a rather watered down version of.