Given the vexed status of Kashmir in Indian politics (to put it mildly) perhaps it is not surprising that Kashmiri food should be so little represented in the Delhi restaurant scene. Back in the early 1990s there was but the one major Kashmiri restaurant—Chor Bizarre in Daryaganj; and in the late 2010s the situation is not very different, with only a few places having joined Chor Bizarre. Chor Bizarre had in between spawned various satellite locations of variable quality but those seem to have all closed now. I do not mourn this as the meal I had a few trips back at the Noida location was not very good at all. Anyway, Khyen Chyen doesn’t have anything to do with Chor Bizarre. They have two locations of their own, one at the Select City Walk mall in Saket and the other at the Cross Point mall in Gurgaon. I met old friends at the Gurgaon location early on my trip in December. Herewith the report.

First of all, let me register my pleasure at the fact that the Cross Point mall is not one of Gurgaon’s many hellish mega malls. In fact, it’s not really a mall at all. It’s an open-air complex dominated by various bars, cafes and restaurants. We had drinks first at a bar called Lock & Key, an establishment of a type that would have been unheard of when I worked in Delhi: a hip bar frequented by men and women alike, most of them middle-aged and very respectable looking. In my day bars in Delhi were far more disreputable affairs. After cocktails we walked down to Khyen Chyen. This turned out to be a rather small restaurant, but nicely appointed. I’m not sure if the Saket location is on the same scale or possibly larger.

The menu is solidly Kashmiri with some nods in the direction of Punjabi preferences (though there’s no butter chicken as far as I can recall). A lot looked tempting to me but we were just three people and we’d made the error of eating snacks along with our drinks at Lock & Key. And so we didn’t order so very much. This turned out to be not such a bad thing as the food was nothing special. Don’t get me wrong: I’d be very happy to have this anywhere within reach in Minnesota (or in Los Angeles when I’m there) but it mostly made me wish I was eating at Chor Bizarre. Everything was tasty but two of the three main dishes seemed to have suffered some North Indian curryfication. In fact the best thing we ate was one of the side dishes, a relish made with radish, walnut, chillies and thick yogurt.

For a look at the restaurant and the food launch the slideshow below. Scroll down for thoughts on service and value and to see what’s coming next. 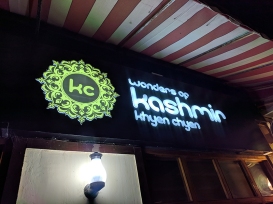 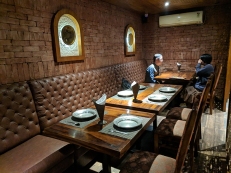 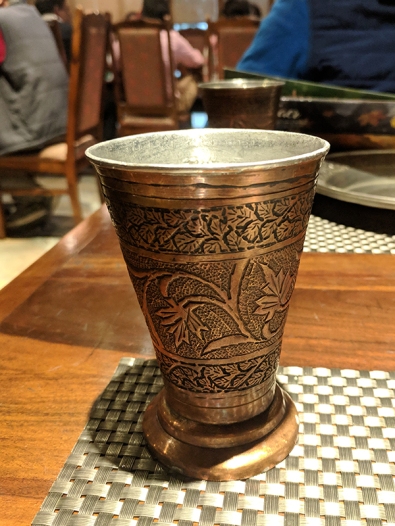 Open the full-size image to be able to read the text at bottom right. 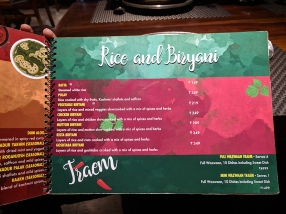 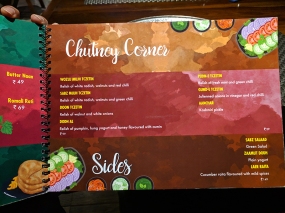 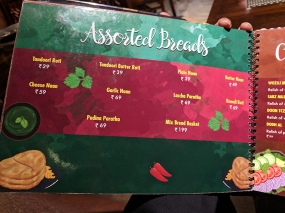 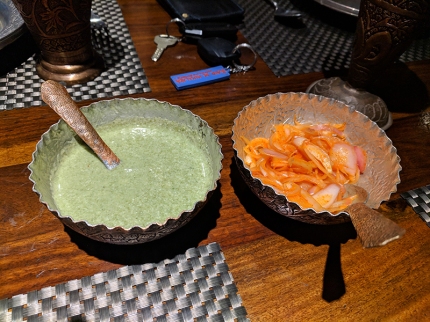 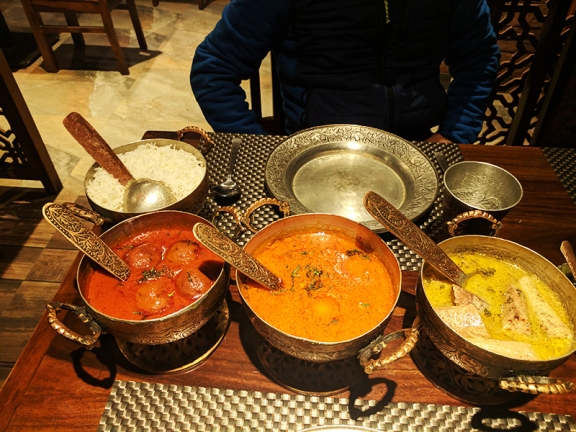 Rista are spongy meatballs served in a red, spicy gravy. This was fine. 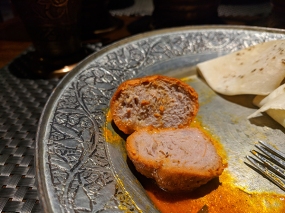 This was over-spiced and anonymous at the same time.

This dish of lotus stems cooked in a yogurt sauce was much better. 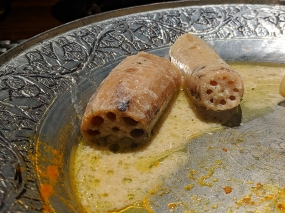 This was very good 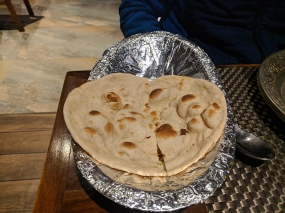 Service was present without being overbearing, which can be a little unusual in Delhi. The bill for all of the above came to Rs. 2385 before tip or about $35. Not bad at all and not so much more expensive than my thali at Bagundi, but I preferred that meal by a wide margin.

By the way, Gurgaon, like Noida, is not a part of Delhi proper. At this point it’s hard to say if Gurgaon is a suburb of Delhi or a constantly expanding monstrous version of it. It is made up almost entirely of massive office buildings, massive malls, massive apartment complexes and massive for-profit hospitals—all linked by barely functional roads and sharing faltering infrastructure. It’s a particularly hellish example of post-liberalization India but unavoidable for me as my sister and far too many of my old friends now live there. In fact I ended up at the Cross Point mall again with my sister and her family later in the trip. On that occasion we ate an Indian Chinese meal, which I might write up briefly as well later.

Coming up next from Delhi will be a report on a more standard-issue North Indian meal. But before that I might have another Minnesota report.