Here finally is the last meal report from our trip to New York in August. This was our last meal out in the city and another round of pizza. We’d spent the day hanging out at Coney Island and at the end had been thwarted in our attempt to eat pizza for dinner at Totonno. The Upper West Side location of Motorino—just a couple of blocks from our flat—was our fallback option and as it turned out it wasn’t a mere consolation prize. It is likely that Totonno is as good as everyone says it is and quite a bit better but we rather liked Motorino’s pizza—which, like that at Totonno, is in the Neapolitan vein. And we much preferred the atmosphere at Motorino to the frenzy at Mama’s TOO! where we’d had our first meal in New York— coincidentally and fittingly, also pizza. Here is how it went.

The comparison to the Mama’s TOO! experience above is not entirely fair. Mama’s TOO! is a slice place, the pizza meant to be taken away; there are seats but they are afterthoughts. Motorino, on the other hand, is a restaurant. There are tables, there are printed menus, there are servers—no one is going to yell at you for standing in the wrong spot and you’re not limited to what happens to have just come out of the oven. In a city where pizza culture is as old as it is deep it was lauded almost immediately when the first location opened in 2008. That first location was in Williamsburg. A year later they expanded to the East Village and at some later point to the Upper West Side, where we ate (and there seem to be licensees in different parts of Asia too).

I have not been to the other locations and so cannot compare either the vibe or the pizza but the UWS branch was pretty calm on a Saturday evening in late August. The tables under their awning were full but there was still plenty of room available inside. The dining room filled up steadily as we ate; and it seemed very clearly a neighbourhood restaurant with families and people of all ages (the crowd at Mama’s TOO! on our visit skewed young and childless for the most part).

The menu is dominated by pizza, as you would expect. The pizza is served as pies, not slices and the general norm seems to be that you order one per adult. The only problem with this setup is that when you are a tourist and see a large number of things on the menu that seem attractive you have to make your peace with only being able to try a small fraction of them. Then again the promise of variety by the slice at Mama’s TOO! was not really lived up to fully on our visit there. As we were a little full from our consumption of fried seafood and hotdogs on the Coney Island boardwalk we decided to restrict ourselves to just two pizzas between the four of us: from the “Red” section we got the Margherita and from the “White” the Cherrystone Clam with fior di latte. And we added on an order of roasted artichoke with a lemon-caper vinaigrette.

All of it was very good, the clam pizza was excellent. Again, I am no pizza maven; so please take my enthusiasm with an appropriate measure of salt. But I thought the crust was great, right at the intersection of crisp and soft (just as the best naans are in a very different context; please note: I’m not saying that their crust is naan-like). I don’t know what their reputation is now but this was much better than the crust in a similar style at our dinner at Minneapolis’ Young Joni earlier in the summer.

Take a look at the slideshow below and scroll down to see what we made of the service and how much all of this cost. 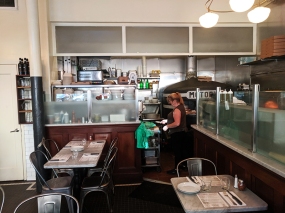 They clearly do significant take-out/delivery business. 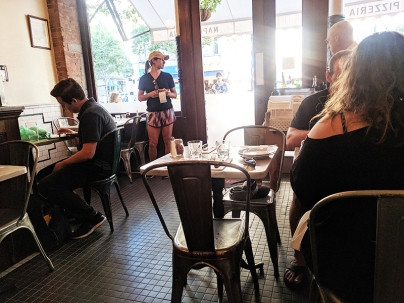 Please admire this arty shot taken on my camera when my phone’s battery died. 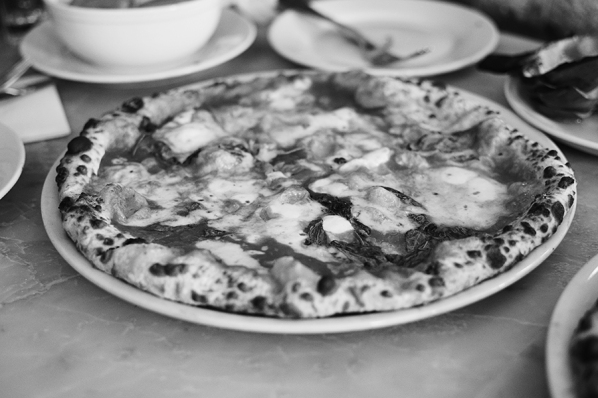 I took one of the Margherita as well before realizing my camera was still in black and white mode from Coney Island. 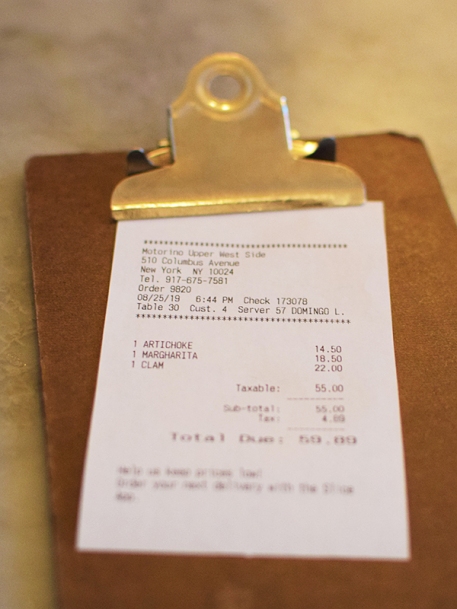 And here’s the place we tried to eat at first. 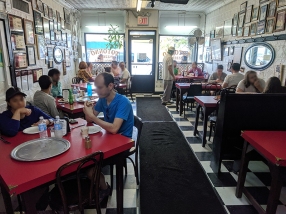 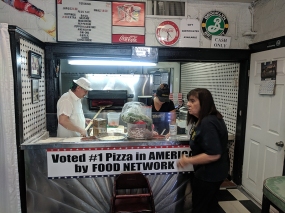 We didn’t have any trouble getting a table (they don’t take reservations). While the interior is not sprawling, and tables neither large nor very far apart, it was not hectic even when tables began to fill up and people began to wait outside. Service was warm and we were not rushed at any point. The pizzas are not cheap: the median price is about $18-20 though the basic marinara is quite a bit cheaper at $12. For the quality it seems a good deal. Our two pizzas and artichoke came to about $59 before tip or just about $72, which seemed to be what we paid at most casual sit-down meals over our 10 days in the city. It was a very good dinner and I can’t say I was crushed to have missed out on Totonno.

Well, we hope to be back in New York again next year, and we hope that we’ll be able to stay in the same UWS flat we stayed in this time. If that works out it’s pretty certain that we will try more of Motorino’s pizza. But New Yorkers and frequent visitors should feel free to recommend other pizzerias of note, whether on the UWS or not.

Okay, with my New York reports done, I am going to go back to my usual schedule of one restaurant review per week. At least for the next month and a half. After that we are scheduled to go off to India in January, perhaps with a brief stop in L.A on the way. So the food reports will heat up again then. Until then, if you’re interested in food, come back for Twin Cities restaurant/grocery reports and recipes. And, oh yes, I’ll soon have a couple more posts that will make me even more friends among American food writers.