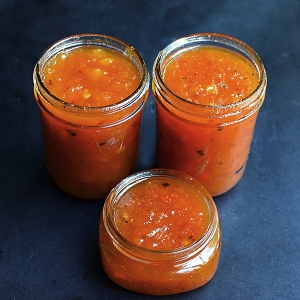 Before I became a pickling fool I used to be a jam-making fool. My jam making has slowed to a trickle in recent years with one exception: peach chutney/jam. I make one version or the other of it every year. Ginger always goes into it (as in this jam with bourbon from five years ago) but the rest usually depends on what’s at hand. This year what was at hand was a lot of habanero peppers from my community garden plot and so I decided to throw them in. To cut the heat I added apple cider vinegar and then at the end I randomly decided to roast and powder some cumin seeds and toss them in too. One of the reasons my peach chutney varies from year to year is that I never write down whatever seat of the pants improvization I come up with. This year, however, some of the friends I gave a lot of the chutney to liked it so much that I wrote it down the next day. I don’t know if I’ll make it the exact same way again next year—I probably won’t—but there’s no reason why you shouldn’t make it like I did, is there?