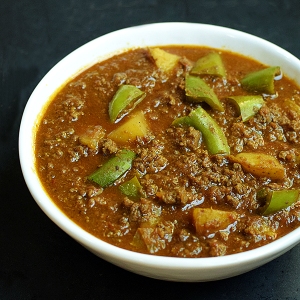 The word “keema” refers to both the ingredient—ground or minced meat—and to the stew-like dishes—not a million miles from chili—that are often made with it. In India the most common kind of keema by far is that of mutton or goat. In the US where goat/mutton is not as easily found I mostly use ground beef—though ground turkey does well in these preps too. In fact, I would say that it is in this kind of preparation that beef comes closest to substituting for goat in Indian cooking. That’s just my opinion, of course, and it shouldn’t be taken as implying that beef doesn’t have a place of its own in Indian foodways. No matter what the Hindu fundamentalist dispensation that is well into the process of destroying what remains of India’s secular fabric will tell you, beef is an Indian ingredient too.

Like everything in the Indian home-cooking repertoire, as a dish the name “keema” does not refer to any set preparations but a rough genre. The spices used vary as do the other things that go into the dish. Potatoes and peas are common but I’ve eaten and made keema with all kinds of veg from sweet corn to cauliflower. And I’ve eaten and made it in all kinds of consistencies from a fairly runny curry to almost dry. This particular version, which I made this past week, falls in the middle in terms of consistency and deploys potatoes and green peppers as the veg. There’s one non-traditional ingredient in there that works very well.

2 thoughts on “Keema with Peppers and Potatoes”