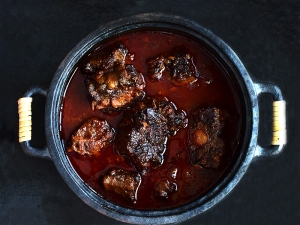 Oxtails are at a premium in our home. Korean-style oxtail soup as made by the missus is one of the boys’ absolute favourite foods and so any oxtail we purchase almost always goes into making that. Alas, good oxtail is not always easy to find. In December, however, I connected with a small farm in the far south of Minnesota that sells their beef and lamb both directly from their website and from a trailer they bring up north once a month and park in a lot, usually in Burnsville. As it happens their route takes them right past the exit on Highway 35 to our town and so I made a date to meet them in the parking lot of the Flying J gas station (aka The Big Steer). The tryst was originally going to be for the purpose of purchasing lamb shanks. I asked if they had oxtails as well and they said they did. I took their entire inventory (less dramatic than it sounds: they had five left). With that many in the freezer at once, and the promise of a re-supply when done, I was able to claim two for my own uses.

When I brought them home I realized that unlike other oxtails we’ve purchased from Asian and Middle Eastern stores—and on a few occasions from the butcher from whom we purchase half a pig and quarter of a cow from time to time—these tails were whole! Would I need to get a saw? How many limbs would I lose? A quick bit of youtubing, however, revealed that oxtails are very easy to segment with just a chef’s knife and so proved to be the case. I defrosted one right before New Year’s and was pleased to discover that it had already been trimmed of most of the fat—though there was still enough left to put away for rendering later (once I have the fat from all five tails amassed). It took less than a minute or so to find the soft cartilage between segments and cut through them. What did I have planned for them? Oxtail curry, of course.

Oxtail braised with tomato is a standard preparation from Italy to Greece and parts beyond and while I’ve never encountered oxtail curry in India it wouldn’t surprise me if it’s eaten there too. (As always, it’s a massive country.) I seared the tail segments, toasted some spices, made a wet masala with onion, garlic, ginger and tomatoes, placed it all in a stone pot, added just enough water to almost cover and slow-cooked it till the meat was absolutely tender. Simple. And oh so delicious with the curry rich and viscous. The whole family devoured it over a couple of days with first parathas and then rice.

If you don’t have easy access to oxtail then you can make this with a collagen heavy cut of beef like chuck or brisket that responds well to long, slow cooking. It probably won’t hurt to add some soup bones to the mix; if you don’t have soup bones use beef stock instead of water. (By the way, if you do live in the Twin Cities metro, I believe Goette Farms will be bringing their trailer up again on February 10. Check their Facebook page for details; sorry, I’ve already reserved all the oxtails.) 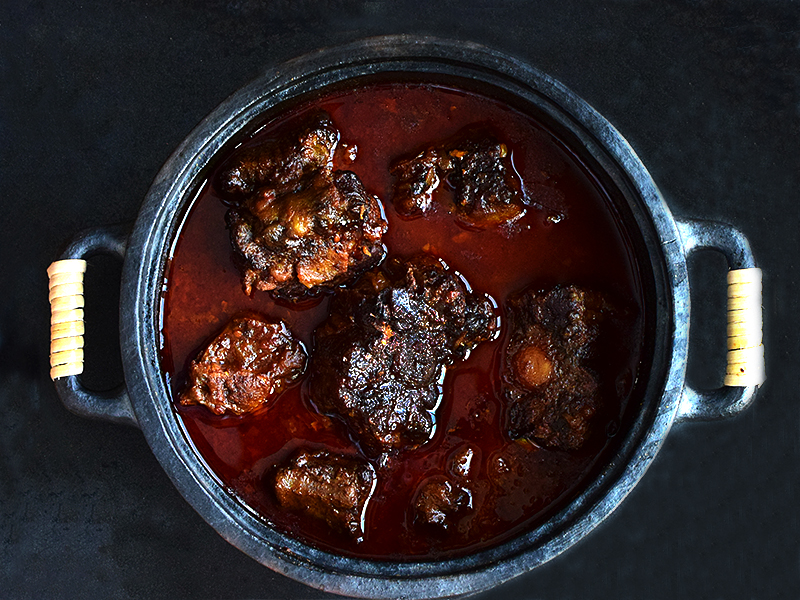