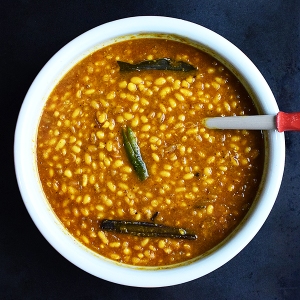 I have previously posted a few other recipes for white beans made in a broad Indian stye. See, for example, this, this, this and this. Looking at these recipes—or, for that matter, at my other Indian bean recipes as well—you might think that they’re all iterations of each other. And you’d be right—that is pretty much what cooking is. You find a general palette of flavours you like and play with proportions and with a few additions and subtractions and expand the range of preparations you make. Today’s recipe for white beans is most obviously an iteration on the recipe I posted in December for “White Bean Stew with Cumin and Ginger”. This one adds more spices and alters the proportions of acid and sugar and ends up a clear relative but with an identity of its own. I make it with Rancho Gordo’s Alubia Blanca beans but if they’re not available when you read this it would be just as good with their Cassoulet, Gay Caballero, Ayocote Blanco or Marcella beans. And if you don’t have any white beans, any other mild bean such as the Mayacoba would work well too. What you want is a bean that will hold its shape and whose pot liquor will let the flavour of the spices come through. I have a block against using the much larger white beans like Royal Corona or Large White Limas in a dish like this but I couldn’t explain why. Just go with it.