What is this now, a tourism blog? Well, why not.

On more or less a whim we went down to Kansas City for a few days earlier this week. We hadn’t been outside southern Minnesota as a family since February 2020 and were itching to go somewhere. With the younger boy not yet vaccinated we were not comfortable getting on a plane and nor were we into the idea of a much longer drive, which would also mean a much longer stay away for it to make sense and would need more planning than a trip made on a whim. Chicago was the obvious choice but we’d been there a few years ago and didn’t really want to deal with the hectic traffic. Kansas City, located exactly six hours from our door, seemed like a great alternative: get on Highway 35, drive six hours south and get off; Des Moines located almost exactly halfway for a lunch stop. Lots and lots of great barbecue to eat once we got there. What could go wrong? Well, a few things did but it was a nice visit overall. Accordingly, here are some tips for anyone else looking to make a quick jaunt to Kansas City and also a request for a list of things we should have seen/done but didn’t. 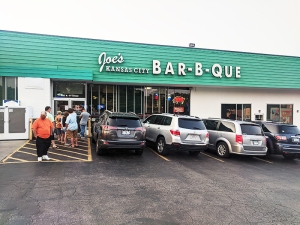 The line out the door at the original gas station location of Joe’s KC. This was on a Monday evening—the line was much longer inside.

Number 1 on our agenda for the trip was the eating of barbecue. Barbecued meat of any kind is the easiest type of food to get inside our boys. And with our increased Minnesotan barbecue intake in the last year (see here and here, for example) we were excited to hit up one of the major centers of barbecue in the country. It would not be an exaggeration—or to anyone who knows us, a surprise—to say that our days were planned around the eating of barbecue. We also ate things that weren’t barbecue, including one of the best Thai meals we’ve had in the US in a while and a meal at one of the mod small plates places that all American cities with more than 300,000 people are now required by law to have at least one of. But what to do before and after meals?

This was our rough, barely-researched itinerary, only the very first entry of which went as envisioned:

Any Kansas City resident or seasoned visitor reading this can probably spot the major problem in this plan. Yes, we arrived at the Kemper Museum on Tuesday morning to discover that it is closed on Mondays and Tuesdays. In our defense, this appears to be new—the doors have signs indicating that it is both open and closed on Tuesdays. Fine, we said, we’ll go to the Nelson-Atkins museum today instead (they’re very close to each other). We subsequently discovered that the Nelson-Atkins museum is closed on Tuesdays and Wednesdays. I did say it was a rough, barely-researched plan.

Even street art is corporate now.

On Tuesday morning we headed over from the Kemper to the World War 1 Memorial. The architecture of the place is impressive—and rather (appropriately) phallic—and the main exhibit on WW1 is generally pretty good, with one major caveat. Though there are nods here and there to the global nature of the war, the exhibit’s emphasis is almost entirely on the Western Front. Nonetheless, we all enjoyed the museum and for the boys it was a highlight of the non-food parts of the trip. From here to Arthur Bryant’s for an excellent lunch (fuller write-ups of all meals to come soon).

We then drove a mile or so to the complex that houses the Negro Leagues Museum and the American Jazz Museum. We were fretting that we might not have enough time to see both fully but it turned out they’re both rather small. We were out of there in quite a bit less than two hours. Of the two spaces the Negro Leagues Museum was our favourite. I have zero interest in baseball but there was much of historical interest. The Jazz Museum is also a good stop but it is far more focused than I would like on a handful of big names (Amstrong, Ellington, Parker, Fitzgerald) with the rest of the history and notable figures of jazz getting fairly short shrift. Given the importance of Kansas City to jazz history I was expecting a lot more. A visit to a jazz club that evening would have been appropriate but a) the boys wouldn’t have been up to it and b) they’re not yet old enough for us to leave them alone for a few hours in an AirBnB in a strange town. Dinner was as planned at Waldo Thai and was rather good indeed.

Wednesday’s adjusted plan saw us heading out first for our expected walk along the Missouri plus a visit to the City Market. We parked at the City Market—absolutely deserted at 10 am—and set off on foot to what we were told was a trailhead on the river. Our expectations set by the many wonderful waterfront walks in Minnesota we were really looking forward to this. Sadly, on arrival at said trailhead we found it to be a combination of not-very scenic and occasionally a little skeevy. If there hadn’t been a few people out for walks with their dogs I don’t know that we would have gone very far. As it is, it being a very hot day we didn’t go very far anyway and were back at the City Market a bit after 11. If there are better places for an extended walk along the river, please do let me know so I can file it away for future reference.

The City Market must be very nice on weekends when the main farmers’ market sits but there wasn’t much life there mid-morning on Wednesday. I do love visiting markets like these but I wouldn’t recommend going on a weekday. We had a quick lunch at Pigwich (at the City Market) and, skipping over something called the Arabia Steamboat Museum, headed to the Kemper Museum. The good news: it was open. The surprising news: it turned out to be tiny! It does not seem tiny from the outside but you go in and its effectively just four rooms. Three of these were taken up with interesting but very small exhibits and the largest housed a wonderful immersive installation titled Pulse Topology. Apparently, it has a large permanent collection but only a small part of it is rotated in and out of public view. There’s apparently more art in their restaurant but given we weren’t eating there it seemed like an odd idea to wander through it. I think we were out of there in not much more than 30 minutes. On the plus side we didn’t have to pay for the brief visit.

Pulse Topology at the Kemper

This left us with most of the afternoon still on our hands. We decided to spend part of it at the Money Museum housed at the Federal Reserve Bank of Kansas City. This was another small space, and it has all the charm you would expect of a museum housed in a federal building, but it was actually rather interesting. I don’t know if I’d recommend a stop to adults by themselves but a good call with small children. The Federal Reserve is in the same broader complex that houses the World War 1 museum and we walked back over there and wandered the grounds more than we had the previous day when we’d mistakenly thought we’d need to save as much time as possible for both the Negro Leagues and Jazz museums. A very nice panoramic view of the city from the very top of the complex (well, not the very top—we didn’t pay to go up to the top of the Liberty Tower). We also found there was another gallery up there with World War 1 objects. We planned to explain at the door that we hadn’t realized the previous day that this was part of the complex (tickets are only good for the day of) and see if they’d let us in but in the end there was no one checking tickets anyway. Back to the flat for some more rest time before dinner (at Voltaire as planned).

At the Kauffman Memorial Garden

Our original plan had been to hit the river and City Market early on this day, eat an early lunch and hit the road not too long after noon. Our adjusted itinerary, however, had the Nelson-Atkins Museum left for this day and they don’t open till 11 am. So as to not spend the morning sitting in the flat we decided to visit the Kauffman Memorial Garden not too far from the museum. And it turned out to be a highlight. It’s a small garden but a lovely, tranquil space with many wonderful plants. From there to the Nelson-Atkins right as it opened. Of course, this turned out to be the first really large museum (and entry is free here too). Truth be told, the boys wouldn’t have been up to an extended visit anyway but we all enjoyed a brief stop centered on an exhibit of works by the Kansas City-based African American Artists Collective plus a look at other pieces from their holdings in modern and more contemporary art. From here to Gates Bar-B-Q for one last banger of a barbecue meal and we were on the road back to Minnesota before 2 pm.

This then was our trip. We’d gladly come back again to eat more barbecue—we barely scratched the surface at the three major places we went to (Arthur Bryant’s, Gates and Joe’s KC) and there are many, many other places to try as well. But I’m not sure what other non-food related things are left for us to do beyond a fuller visit to the Nelson-Atkins Museum. A Royals game? Well, we’ve never even been to a Twins game. Maybe a jazz club when the kids are older. I’m not sure if I see another dedicated trip in our future. More likely, we’ll use Kansas City as an overnight first/last leg stop on other, longer road trips over the coming years and eat some barbecue on our way in and out of town (and carve out some more time for the Nelson-Atkins whose collection does seem quite impressive).

That said, I’m sure we missed some/many worthwhile places to visit on this trip. If you know what these are please do write in below. In the meantime, if you’re considering a trip to Kansas City of similar duration perhaps this will be have been useful to you as. My overall recommendation is to go not from Monday-Thursday but from Wednesday to Saturday. If we’d done that we could have spent more time at the Nelson-Atkins and seen the City Market at its vibrant best.

(And oh, I should add for the benefit of others pondering a visit in what are hopefully the waning weeks/months of the pandemic: we did not find Kansas City to be leading the charge for mark usage. Most indoor spaces did not require masks and the few that did did not enforce the rule.)

In the coming weeks I’ll have bonus reports on our Kansas City meals alongside the regular Twin Cities reports. And in a few weeks we might do another, smaller road trip. We’re thinking Madison, Wisconsin. Any intel on things to do there as a family with young children would be highly appreciated.