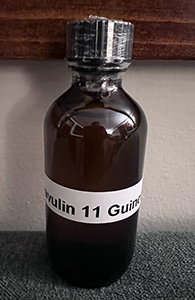 The first Lagavulin Offerman Edition was released in 2019—you probably know the story: Nick Offerman is a big Lagavulin fan (as was his Parks and Recreation character, Ron Swanson). I reviewed it then (just over two years ago). At the time I assumed that was a one-off but now here’s a second. Like the first, this is 11 years old; unlike the first, it has received a finish of a few months in Guinness casks. As to whether the base spirit was matured and vatted in exactly the same way as the previous 11 yo, I do not know. If you know more about any of this please write in below. I do know that I liked the first Offerman edition—more than some others did, I think. I did not find it to be gimmicky at all. I have to say I’m far more dubious about this one. Even if I were more positively disposed towards “finished” whiskies the thought of a beer finish causes my eyebrows to twitch. Though I suppose there is some bass note crossovers between stout/porter and the dark pleasures of Lagavulin. Anyway, let’s see what this is like.

Nose: Not very beery off the top. Quite phenolic and coastal though with a fair bit of ink and shells and salt mixed in. A little tar as it sits but I can’t say I’m tracking the Guinness. As it sits the phenolic notes retreat, the smoke gets a little dry; softer notes of vanilla emerge as well along with a bit of roasted malt, chocolate and coffee grounds that may owe more to the beer than to the spirit. With more time still there’s some citrus as well (lemon peel). A few drops of water and the citrus expands (preserved lemon now).

Palate: Comes in with a big dose of smoke here as well and there’s more char (burnt rope) than on the nose. The smoke colonizes my mouth as I swallow turning a bit bitter and then a lighter phenolic wave arrives. A nice drinking strength. The salt emerges on the second sip and blends nicely with the char—not getting the rest of the coastal complex though or the chocolate that showed up on the nose. Let’s give it some more time. There’s some chalk to go with the salt and the char but nothing that shouts Guinness! Okay, let’s add water. Water pushes the char down and brings out more acid here too.

Finish: Long. The smoke goes from bitter to ashy and charred quite quickly and lingers for a long time. Develops as on the palate with time and water.

Comments: It’s been a while since I’ve had the Lagavulin 16 but this seems to me to be an obvious sibling. The smoke is less phenolic-vegetal/mossy maybe and there are some brighter and some more bitter notes here. It would certainly make for a good head-to-head experience. My only complaint is with the pricing: why should I be paying more for this than I would for the venerable 16 yo?