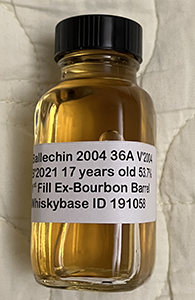 Back in the middle of 2020 I posted reviews of a trio of whiskies from Edradour. Let’s begin 2021 with reviews of a trio that bear the name Ballechin, aka peated Edradour. Until that trio of Edradours in mid-2020 I had actually only ever reviewed Ballechins from the distillery. And with only one exception—this Signatory release—I had only reviewed official releases, including a number of the cask variations (port, oloroso, marsala, madeira) released during the spirit’s initial march to the first 10 yo release. Since then a number of older Ballechins have hit the market from various indie bottlers. which leads us to this trio which represents the oldest Ballechins I have yet tried. This trio, furthermore, has been bottled by WhiskySponge, the outfit that bears the nickname of its proprietor, Angus MacRaild. The Whisky Sponge first became known to the general populace via the excellent eponymous blog that lampooned the excesses of the industry—and occasionally published more serious commentary as well. Somewhere along the line Angus M. seems to have become an indie bottler himself—more evidence that I really am out of touch with malt whisky developments is that I only noted this relatively recently. He also became a contributing writer on Serge Valentin’s Whiskyfun a few years ago. Now Angus seems to be an upstanding type but I have to confess I find a little messy the situation of one independent bottler regularly reviewing releases from his competition on what is undoubtedly the most influential whisky buying guide around—especially for indie releases.

This particular trio was released as the Spongetopia Trilogy bearing the appellations 36A, 36B and 36C. Let’s hope that as trilogies go it’s closer to the original Star Wars films and not the prequels. I am reviewing 36A today, a 17 yo bottled from a first-fill bourbon barrel.

Nose: Big farmy peat along with a fair bit of salt; some sweeter notes come out from below on the second sniff (vanilla). The sweet stuff expands with time and it softens on the whole. With more time and air still some of the lime from the palate pops out here as well. A few drops of water push the smoke back and pull out more of the lime; the whole is softer now.

Palate: Comes in very much as on the palate. The smoke is perhaps drier here and the sweet notes aren’t really in evidence at first. Nice texture and a very good drinking strength. Burnt rope as I swallow. More char and more salt with time and just a bit of lime peeking out too. With more time the sweeter vanilla begins to emerge here, melding well with the char. Okay, let’s see what water does. As on the nose, it softens the whole but it’s still quite smoky here, still quite a lot of char (less farmy though).

Finish: Long. The smoke keeps going and picks up a fair bit of phenols and tar. With time and water it’s softer here as well with more acid coming out to join the smoke.

Comments: This is very nice. It doesn’t wear its age very openly on its sleeve—which is not an undesirable quality if you are a human in my age bracket but perhaps not what you’d want if paying for a 17 yo whisky in today’s market. Be that as it may, what it is is a big peaty whisky of the farmy school that may not have much by way of development or complexity but also does not have any flaws. All of that is good (depending on what the price was).