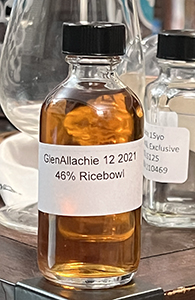 Glenallachie, or The GlenAllachie, as they style themselves, is another of the Scottish distilleries I have very little experience of. I’ve only reviewed one other—this 22 yo bottled by/for Whiskybase. It is a young distillery—only built in 1967—and is also one of the few independent distilleries left in Scotland. Mothballed in 1985, it was purchased in 1989 by Campbell Distillers, who in turn later became part of Pernod Ricard’s holding. In 2017 it was purchased by a group including Billy Walker, ex of Glendronach. The following year the distillery released a new core range, featuring 10, 12, 18 and 25 yo whiskies. They’ve since added 8, 15, 21 and 30 yo expressions to that lineup. Good on them for not going the NAS route as so many have done. They’ve not as yet released any single cask whiskies—as far as I know—which means we might have to wait a while to find out if in the move from Glendronach to Glenallachie, Billy Walker’s understanding of what the term “single cask” means has undergone any development. At any rate, I am interested to see what this 12 yo is like. My understanding is it is put together as a vatting of ex-oloroso, PX and virgin oak-matured spirit. An unusual combo, to be sure. Let’s see what it’s like.

Nose: A rather nice mix of fruit to start: orange peel, lemon, stewed apples with baking spices (cinnamon, nutmeg), a touch of pineapple. More oak on the second sniff but nothing too obtrusive. As it sits there’s a fair bit of mixed sweet berries in the fruit complex. With time there’s a fair bit of pastry—and instead of stewed apples there’s apricot baked inside it. A few drops of water and there’s even more of the pastry crust along with quite a bit of brown butter.

Palate: Not as fruit-forward on entry but it begins to build as I swallow. A good drinking strength and full texture. More lemon on the second sip and also more oak (not tannic). The richer, muskier fruit pops out earlier with each sip. With more time the oak gets a bit too bitter for my taste. Okay, let’s see what water does for it. Well, it pushes the oak back a bit but it also pushes the fruit back (even as it pulls out apricot jam here). A slightly metallic simple sweetness develops as it sits.

Finish: Medium-long. The fruit builds here and it’s muskier than on the nose or palate, with little hints of passionfruit playing around the edges. The oak spice builds as well, turns bitter, and has the last word. A.s on the palate with water

Comments: Well, this was a nice surprise. Just a bit too much bitterness from the virgin oak casks—though that might also be the source of some of the brighter fruit. Are all the releases this good? I think I’ve read there’s a fair bit of variation even within releases in the same year. I might have to look into a bottle anyway (if available locally).