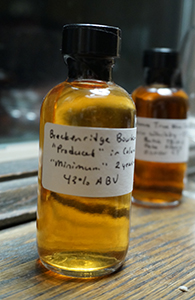 I know almost nothing about the Breckenridge distillery from the town of the same name in Colorado. I got this sample from Michael K. at Diving for Pearls and so the following information is from his review. There is some confusion over the source of the whiskey in the bottle (it may just be easier with newer American distilleries to note when this is not the case). The distillery originally bottled bourbon distilled in Kentucky while waiting for their own distillate to come on line; around the time they bottled this one (in 2012, I think) they were apparently in the process of transitioning over from a mix of sourced bourbon and their own distillate to bottling only their own distillate. As to whether what they’re selling now is uncontroversially their own distillate I have no idea. Still, it’s notable that a) they are in fact making their own whiskey now and b) their sourced bourbon wasn’t from Indiana. These facts, alone or in combination, distinguish them from most American “craft” distillers. But is what’s in the bottle distinguished in anyway? Let’s see. END_OF_DOCUMENT_TOKEN_TO_BE_REPLACED