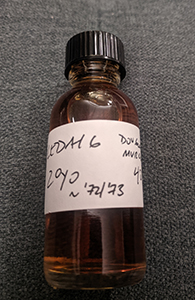 On Monday I had a review of a 37 yo Strathisla distilled in 1967. Today’s Ledaig is not quite as old in terms of maturation but was distilled not too many years later. The distillation year is not specified on the bottle this sample came from but it is said to be either 1972 or 1973. On what basis it is said to be from one of those years I’m not sure but it’s said by people who know far more about these things than I do. I’m not sure who the bottler, Douglas Murdoch is/are either but one sign that this was bottled before the single malt boom got under way is that it is at 40%. In the early 1990s I don’t think cask strength whisky was as fetishized as it is now and better known outfits like Gordon & Macphail were also releasing older whiskies at that strength (and in G&M’s case continued to do so for many years after). Anyway, if this is indeed a 1972 or 1973 distillation I am hopeful that it will be of a quality similar to that of the only other Ledaig 1972 I’ve had: this excellent 40 year old from Alambic Classique. Let’s see how it goes. END_OF_DOCUMENT_TOKEN_TO_BE_REPLACED