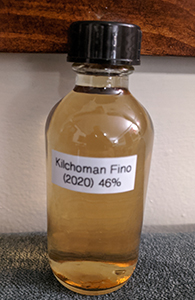 It’s the 18th of the month and this is my seventh review in a row of an official distillery release. No, I don’t know what’s going on either.

I missed Kilchoman on my mini tour of Islay in December and so here now is a review of a Kilchoman. (I also missed Bunnahabhain and Bruichladdich and will be stopping in at both of those distilleries this week as well.) I was a big fan of Kilchoman’s early releases of very young bourbon casks but have somehow lost track of them in the last five years or so. I’d hoped they’d graduate to putting out a regular 10-12 yo and it doesn’t seem like that’s happened yet. Their website only lists four NAS releases in their core lineup (of which I’ve reviewed releases of the Machir Bay and 100% Islay) and several annual limited editions. This was one of their limited editions for 2020, vatted from spirit fully matured in 11 fresh and one refill fino sherry butt. Let’s see what it’s like. END_OF_DOCUMENT_TOKEN_TO_BE_REPLACED 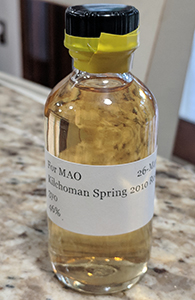 Let’s make it a week of Islay whiskies. On Monday I had a review of an 18 yo Laphroaig and yesterday I had a review of a 10 yo Bowmore. We have another big drop in age today, all the way down to 3 years old, the legal minimum for Scotch whisky; and we’re also moving from the larger, more established and storied distilleries to a small upstart. Kilchoman, the small Islay farm distillery (which I visited briefly last June), only started distilling in late 2005. I believe the first official whiskies were released in 2009. There were a bunch of cask strength releases in the US in mid-2010. I still have some of at least one of these saved (the Binny’s cask) and will probably get around to reviewing it one of these decades. At around the same time they had begun to release larger vattings at 46%. There were a number of these seasonal releases for at least the first few years—I confess I’ve sort of lost sight of what Kilchoman has been up to in recent years, despite rather liking all the early releases I’d tried. Well, maybe I’ll try to address that.

Meanwhile, here’s a blast from the past. This was put together in a complicated way with a mix of bourbon and sherry casks—a finish may have been involved (I’m too lazy to look it up). END_OF_DOCUMENT_TOKEN_TO_BE_REPLACED

I was recently mock-praised for reviewing something released as recently as a year ago. As even mock-praise makes me uncomfortable, I have in response a review of a whisky released five years ago: a sherry cask Kilchoman bottled for K&L in California.

Kilchoman was not quite new at the time but they weren’t quite as established and didn’t have as much of an identity as they do now. But they were already producing whisky that belied its (young) age. I think the very first Kilchoman I had was a 3 yo bottled for Binny’s in 2010 (I don’t think I reviewed it, but I do have a large reference sample saved…) and it was way better than any 3 yo whisky has any right to be. Most of the ones that I have reviewed have been just a bit older (including another K&L cask, this one ex-bourbon, and a PX cask bottled for WIN in the Netherlands). I’ve generally liked them all. And I can tell you before you get to the review that I liked this one—which was probably distilled at around the same time as that Binny’s ex-bourbon cask a lot. A more detailed accounting follows.  END_OF_DOCUMENT_TOKEN_TO_BE_REPLACED

Here now is my last distillery report from our visit to Scotland in June. Fittingly, it’s of the most recently built, functioning distillery on Islay, Kilchoman. The smallest distillery on the island, it’s the one that’s least like the others: the most remote (relatively speaking), located not on the water but among farms, and absolutely independently owned. I’ve liked their malt since the very first one I ever tasted—a 3 yo bottled for Binny’s in 2010—and so I was glad to be able to stop in for a few minutes on our way for a ramble around Machir Bay (Kilchoman may not be on the water but you’re never far from the water on Islay). END_OF_DOCUMENT_TOKEN_TO_BE_REPLACED

This is my first Kilchoman that’s been anywhere near a Pedro Ximinez sherry cask. It was bottled for Whisky Import Nederland in 2014 (I’m not sure if it is still available). It was only finished in PX and the outturn was a mere 258 bottles. This suggests that it started out in a bourbon hogshead, though it’s not clear to me if in such instances they would only fill a sherry butt halfway to finish one bourbon cask or if two bourbon casks get dumped in together and the product then split for separate releases; if so, the cask number below may just be for the cask in which the whisky was finished. In other words, perhaps more Glendronach-style labeling. Or maybe not—if you know more, please write in below.

At any rate, I’m intrigued to try this. While I’ve not loved every Kilchoman I’ve tried, I am a big fan of the distillery and curious to see how their spirit stands up to the heavier and sweeter PX sherry. Let’s get right to it. END_OF_DOCUMENT_TOKEN_TO_BE_REPLACED

This is one of K&L’s exclusive bottlings of Kilchoman and therefore THE GREATEST WHISKY FROM THE GREATEST DISTILLERY EVER! Well, I don’t know what Driscoll actually said about it as I don’t really read him regularly anymore—you can let me know if I’m very far off the mark.

Michael K., the depraved bastard who writes Diving for Pearls, proposed a bottle split of this some time ago. I’d completely forgotten about it till I got to Los Angeles and then he accused me of trying to renege on the deal and it got kind of ugly. Anyway, as recompense I had to agree to simul-review this, and I believe Jordan of Chemistry of the Cocktail is also doing one. So, after reading this you should go to their blogs and see exactly how they got it wrong. I’ll provide the links once I have them. As always, we won’t see each others’ reviews till they go up.

END_OF_DOCUMENT_TOKEN_TO_BE_REPLACED

It’s been a while since I last tasted (or reviewed a Kilchoman). I have a large number of samples sitting on my shelves from swaps and previously deceased bottles and it’s time to bring their number down a bit.

Kilchoman, as you probably know, is the youngest distillery on Islay. They’re a very small distillery, with very limited output (compared to the big boys on the island) but their reputation is quite high. They may not be set up to produce much but what they put out is invariably good. For their regular releases they use barley peated at the Port Ellen maltings on Islay to about 50 ppm (which is at Ardbeg levels) but for these 100% Islay releases (of which this is the 3rd edition) they use only barley malted on site to 20-25 ppm (see Jordan D.’s post from late-2013 confirming this). This means this will be quite unlike the other Kilchomans I’ve tried and so I’m quite looking forward to it. END_OF_DOCUMENT_TOKEN_TO_BE_REPLACED 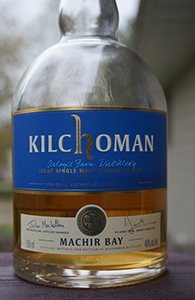 There have been two releases of Kilchoman’s Machir Bay and this is the first. While the bottle label does not specify the year, the box does. The second release came a year later in 2013. I don’t really keep up with distillery news and so I’m not sure whether the Machir Bay series is intended as an ongoing regular expression until they get to whatever their regular age stated release is going to be, or what the relationship is between this and the vintage releases. If you know please chime in below.

This runs between $50 and $60 in most US markets which puts it slightly above my proposed price ceiling for young NAS whisky.

END_OF_DOCUMENT_TOKEN_TO_BE_REPLACED 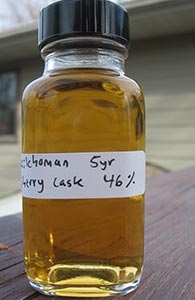 This was a limited edition vatting of sherry casks released in 2012, I believe. Since then there have been single sherry casks available in the US from specific retailers and there’s also the new Loch Gorm release. I’m interested to see how this compares to the ex-bourbon 5 yo that I reviewed a couple of weeks ago. I actually tasted this right after that one and took notes. In case, you wonder why in such cases I don’t publish the notes together it’s because I like to leave myself a little more time to do each write-up. Also, a review a day gives the illusion that I’m more active than I really am.

Kilchoman 5, Sherry Cask (46%; from a sample received in a swap)

As per the Kilchoman website they use only oloroso butts and hogsheads (presumably reconstructed). END_OF_DOCUMENT_TOKEN_TO_BE_REPLACED

Kilchoman, as everyone knows, is the recently opened, eighth distillery on Islay. They are a small farm operation that produces peated whisky, all of which that I have tasted is of a very high quality and shockingly good for whisky this young–this 5 yo was at the time of release the oldest whisky from the distillery. [Edit: See the comments below]–and the resulting malt while smoky is not defined by heavy smoke. Prices are high relative to age, but I am willing to give them a pass on this because a) their production volume is very low, which means low economies of scale and b) as a small, independent distillery they need to generate cash till their maturing spirit reaches a higher age. I hope that when it does the Kilchoman 10 or 12 or whatever it ends up being will be priced fairly. END_OF_DOCUMENT_TOKEN_TO_BE_REPLACED