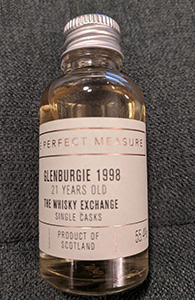 I was not very enamored of the Glenburgie 21, 1998 I reviewed on Wednesday. Here now is another Glenburgie 21, 1998. Wednesday’s was bottled by Douglas Laing for K&L in California. This one was also bottled for a store, in this case the Whisky Exchange in London. I’m more than a little unclear on who the bottler technically is, however. The Whisky Exchange has had a number of labels over the years and recently spun off Elixir Distillers as a separate indie bottling concern. In fact, there is another Glenburgie 21, 1998 bottled by Elixir Distillers under the old Single Malts of Scotland label. This Glenburgie 21 and a number of other recent exclusive releases, however, were put out under a  Whisky Exchange label. I am a simple man and I find all this very confusing. I guess I could have asked the source of my sample, the estimable Billy Abbott, to clear it all up but I am also an old man and things don’t occur to me at the right time. Billy, if you read this, please explain in the comments. Anyway, let’s get to it. END_OF_DOCUMENT_TOKEN_TO_BE_REPLACED

And here is the last of my reviews of K&L’s 2019 exclusives. (I think it’s the last anyway—I hope there isn’t another sample lurking somewhere.) As with most K&L consignments over the years, I’ve found it to be a bit of a mixed bag. That said this might have been one of the stronger years.  None have been bad, none have been great, most have fallen in the drinkable to very good range. Fair enough: that’s where most single malt whiskies fall. And if I still lived in Los Angeles there were a couple I would have liked to have picked up—the Ardmore, in particular, was very well priced relative to its quality. I’m hopeful though that this Glenburgie will be a strong closer, following on last week’s sherry cask Dailuaine which I quite liked even as I didn’t find it very distinctive. Bourbon cask Glenburgies can be very good indeed and as I don’t get too many opportunities to try them in the US I am looking forward to this one. That it’s from a refill hogshead is even better news in my book. Let’s see how it goes. END_OF_DOCUMENT_TOKEN_TO_BE_REPLACED

Let’s make it a week of whiskies in their 20s. This Glenburgie is a year younger than Monday’s Benrinnes and distilled eight years after Tuesday’s Brora. I liked both of those whiskies a lot and as I usually enjoy bourbon cask Glenburgie I am also expecting to like this one a lot. Indeed the only Glenburgie I’ve reviewed that I did not think was at least very good was a 21 yo Signatory exclusive for K&L; others have been the very epitome of fruity and oaky bourbon cask goodness. This 23 yo was also an exclusive; it was bottled for the now defunct Chester Whisky, a combo shop and bottler based in Chester, England. Well, as I type that I realize that I don’t know if the shop is defunct as well; it may just be the indie bottling operation that is no longer on the go. They didn’t bottle very many whiskies even when they were on the go. I’ve previously reviewed their Bowmore 15, 1998 (which was just fine) and their Tomintoul 45, 1968 (which I liked a fair bit). Let’s see how this one goes. END_OF_DOCUMENT_TOKEN_TO_BE_REPLACED

Glenburgie remains one of the great unsung Scottish distilleries. Almost all their production goes into Chivas Bros.’ blends—mostly into Ballantine’s, I believe. I don’t believe there is any official Glenburgie beyond entries in the 500 ml “Cask Strength Edition” series sold in the group’s distilleries’ shops. This lack of recognition is really a shame as bourbon cask Glenburgie is almost always at least very good and can be very, very good indeed. I’ve not reviewed very many on the blog but Glenburgies always catch my eye and I purchase them when the opportunity arises. I can’t remember when it was that I purchased this one (my usually dependable spreadsheet fails me on this occasion) but it is the oldest Glenburgie I’ve yet had. Older doesn’t always mean better: sometimes it can just mean oakier (of course, it also always means “more expensive”). This one, I am happy to say, is very good—I opened it for my local group’s premium tasting earlier this year and it went down a treat. Here now is my review.  END_OF_DOCUMENT_TOKEN_TO_BE_REPLACED 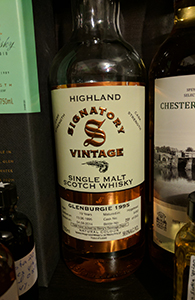 I was not a big fan of the last Glenburgie I reviewed. That one, a 21 yo and also bottled by Signatory, was part of K&L’s uninspiring lot of single casks from late 2016. This one was bottled for Binny’s in Chicago—in 2014, I believe—and is in fact a sibling of another K&L cask, also 19 years old and from 1995 (K&L got cask 6449 and Binny’s got 6450). Well, I always say that when it comes to bourbon cask whisky I trust the Binny’s selection process far more than that of any other store in the US, and when first opened this bottle bore that out in spades: it was a perfect mix of oak and big fruit with tropical accents. I’d opened it for one of my local group’s tastings and it handily thumped the competition that night. Alas, with time and air in the bottle the fruit seems to have subsided somewhat on the palate—my last couple of small pours did not feature that explosion of fruit. Well, who knows, maybe it will come back again as the bottle sits [foreshadowing].  END_OF_DOCUMENT_TOKEN_TO_BE_REPLACED

K&L’s annual winter parcel of Signatory cask exclusives arrived a few weeks ago. As I did last year, I split these with a bunch of other whisky geeks—the idea being to try before buying. Given David Driscoll’s skill with hype—and the apparent endless market out there for hype—there’s always the risk of things selling out before you get around to tasting a sample, but that’s far better than the risk of spending $80 or more on what seemed like a great deal only to discover that it wasn’t. That was certainly true in spades with the Linkwood 19 that I reviewed last week. It was not terrible but it had absolutely nothing to recommend it. I’m hoping this Glenburgie will be better. Bourbon cask Glenburgie can be very good indeed (see, for example, this official release) and, as it happens, a couple of years ago K&L had another Glenburgie from Signatory that I quite liked. Well, let’s hope this one is closer to that than to this year’s Linkwood. END_OF_DOCUMENT_TOKEN_TO_BE_REPLACED

Here is another of K&L’s exclusives for 2014. This is another cask strength bottle from Signatory wearing the livery of their 46% UCF series. This is from Glenburgie, a workhorse distillery from the Speyside that produces malt for Chivas Bros.’s blends, in particular for Ballantine’s. It’s a distillery that flies under the radar but their malt can be very good indeed. In fact, one of the malts that spurred me to further exploration of releases off the beaten track was a 500 ml bottle of Glenburgie from Chivas Bros.’ Cask Strength Edition series. That was a 15 yo, 1992 that I reviewed not too long after starting the blog and I already know that this one is not quite in that class: I opened it for one of my local group’s tastings a couple of months ago. That’s not to say it’s not good, however; we all liked it a lot. In fact, at the time I liked it more than the Signatory/K&L Glen Ord 17 that was released at the same time—and that one improved by the time I got around to reviewing it. Will the same be true of this one? I hope so.

END_OF_DOCUMENT_TOKEN_TO_BE_REPLACED

Glenburgie is one of Chivas Bros.’ workhorse distilleries, and not very much is available officially as a single malt (most of the spirit goes into blends like Ballantine’s). This bottle is part of a 500 ml cask strength series that was initially available only at the group’s distilleries, but has since come to retail in the UK. This is the only one I’ve had from that series–I’m told most everything released in it has been good–and is one of a very small handful of Glenburgies I’ve had. I have, therefore, nothing of interest to tell anyone about the series, the distillery or the general character of the malt.

And so, let’s get right to it.

Nose: Honey, roasted malt, polished wood. Gets quite syrupy with a little bit of time. Rather voluptuous. Some pine, some rye in the distance as well. With time the fruit makes its appearance on the nose as well: a melange of tangerine, pineapple and apricot. Oh my, the apricot really intensifies with time, turning to apricot jam. Water dials back the apricot and emphasizes the citrus; and a very appetizing buttery pastry aroma shows up as well. END_OF_DOCUMENT_TOKEN_TO_BE_REPLACED