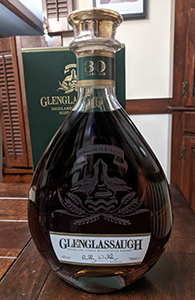 Let’s go a bit east from Glen Moray to Glenglassaugh, the distillery that sits right outside the Speyside in the eastern Highlands. It’s a distillery with a checkered history: built in 1875, closed in 1907; rebuilt in 1960, closed again in 1986; and then re-opened again since 2008. I have not had any of the malt made since the stills fired up again. This 2016 release of the 30 yo was, of course, made before the distillery’s most recent closure. As I noted in my only other review of a Glenglassaugh—an even older indie release distilled in 1972—the character and quality of this malt will have no bearing on what’s being made there now.

Before I get to that quality, a word or two on the bottle. I hate to talk about packaging but it’s hard not to with this one. It’s a heavy bottle with a striking teardrop—or is it pear?—shape. Much of the weight seemingly is in the stopper—a honking great, garish gold monstrosity that plugs an extra large mouth. God help you if the cork on your bottle breaks as you open if for the first time—no other cork you may have saved up for emergencies will fit. This over-the-top design approach, thankfully, didn’t extend to the box, which is made of cardboard not wood; doubtless saving me another £20-30 at the least. Don’t get me wrong: it’s nice to have some character in bottle and label design—but maybe lay off the gold a little bit? Anyway, I assume the current releases have regular corks. Maybe I’ll get some use out of this one as a paperweight when the bottle is done. END_OF_DOCUMENT_TOKEN_TO_BE_REPLACED 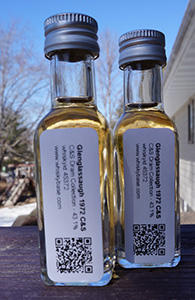 This is my first ever Glenglassaugh and I’d be lying if I told you I know much about this distillery. Away to Malt Madness we go! Okay, so now I know that the distillery was mothballed in 1986 by the Edrington Group and then reopened in 2008 by new owners who purchased a lot of new equipment, which means the new spirit is unlikely to be like the old spirit. These new owners have released a few older expressions (from malt made by the previous regime) that have generally been well-received. I wish I could say the same about their own very young release, the Glenglassaugh Revival. While there are some who seem to like it, it made a number of “Worst of the Year” lists when it was released. But that was a 3 yo–who knows what the mature malt will taste like. At any rate, as the whisky I am reviewing today is also from the previous owners, and a different era, it is not going to be any sort of predictor of the quality of the malt currently maturing at Glenglassaugh either.

Let’s get to it. END_OF_DOCUMENT_TOKEN_TO_BE_REPLACED