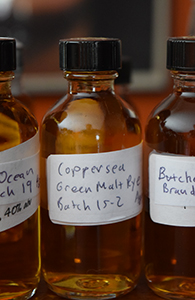 Coppersea are a new’ish New York craft distillery. In the world of American spirits very few phrases evoke the kind of terror that “craft distillery” does. Despite what their websites say, many craft distilleries seem to stand for unpleasant, undrinkable spirits you pay vastly inflated prices for while the well-meaning, young people with beards who run them figure out how to make whisky or whatever with some production twist that is meant to intrigue as well.

Do Coppersea have a production twist? Yes, they do; more than one actually: they make their whiskey from grain that is still germinating (thus green malt) and they don’t kiln it; and they apparently use some barrels made of New York oak (locally sourced!). They have the inflated price down too. The retail price for this rye is $95 for 375 ml. That almost makes up the upcoming Booker’s Rye seem like a bargain at $300—after all, at Beam they actually have been making whisky a long time and Booker’s Rye is probably going to be very good and aged longer than the .6 years this one was aged for. (Yes, you read that correctly: there’s a decimal point before the 6.)  I guess they couldn’t wait another .4 years. END_OF_DOCUMENT_TOKEN_TO_BE_REPLACED