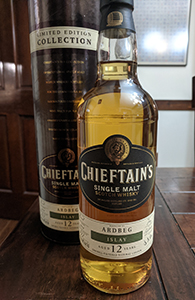 Here is the last stop on my little tour of Islay this month. I started at Caol Ila a week ago, Friday and then moved on to Bowmore last Monday. After that I cut across to the south shore, stopping first at Laphroaig and then at Lagavulin. Today I go another mile up the road, to Ardbeg. (My apologies, by the way, to Bunnahabhain, Kilchoman and Bruichladdich—I will try my best to get to them next month in another whistle-stop tour of Islay.)

As with all the other whiskies from this tour, this is an indie bottling. It was released by Chieftain’s in 2011. For reasons I cannot explain it has taken me till 2020 to get around to opening it. But better late than never, to coin a phrase. I opened this bottle in early October. I was fully expecting to be underwhelmed: a single cask bottled at 46% by one of the lesser indies. But, as you will see, I was more than whelmed. END_OF_DOCUMENT_TOKEN_TO_BE_REPLACED

I closed out September with a review of a bourbon cask whisky from a Speyside distillery; let’s start October with another bourbon cask whisky from a Speyside distillery. Glenburgie is only about 20 minutes away from Longmorn—which is where Wednesday’s whisky was distilled. I guess that’s not saying much as most distilleries in the Speyside seem to be within 20 minutes drive of each other. Like Longmorn, except even more so, Glenburgie is not a heralded distillery, producing mostly for Pernod-Ricard’s blends (Pernod-Ricard also own Longmorn). I say “except even more so” because Longmorn has a strong reputation via indie bottlers, especially for their whiskies from the 1960s and 1970s. Glenburgie, on the other hand, I don’t think anyone has ever gotten very excited about. They make excellent whisky though and I’m always happy to try a Glenburgie. Let’s see if this one bears out my confidence. END_OF_DOCUMENT_TOKEN_TO_BE_REPLACED

As long-time readers (the few, the imaginary) know, I am not generally a fan of wine-finished whiskies. But I am a fan of giving things a chance if they don’t cost too much. Here therefore is a young Ledaig distilled in 2007 and finished in Pomerol casks. How many Pomerol casks, I’m not sure. The bottle label lists three cask numbers with a total outturn of 689 bottles. That would seem like three bourbon hogsheads worth. So either three bourbon casks got emptied into a large Pomerol cask or each ended up in a separate Pomerol cask before being vatted for bottling. I’d guess the latter as I think only the cask(s) that last held the spirit can be listed on the label. However it was made, I got two ounces from a bottle split last year. I’ve recently had a number of high quality young Ledaigs from around this period and it seemed like a decent bet. It’s still available, by the way. END_OF_DOCUMENT_TOKEN_TO_BE_REPLACED 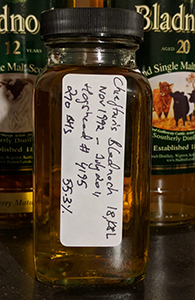 My last two reviews have been of long-forgotten samples of bourbon cask whiskies released in 2010-2011 and, given how much I enjoyed those Aberlours (here and here), I figured I might as well keep that trend going. Here now is a review of a Bladnoch 18, distilled in 1992 and bottled by Chieftain’s in 2011 for my old friends in California, K&L. This was a more innocent time at K&L: Driscoll’s hype machine had not been cranked up to 13 yet and the hit rate for their cask selections was pretty good. It’s probably the case that the latter was true largely because more quality casks were available to independents then; and it’s also probably the case that the former was true because the latter was true. That is to say, the noise seems to have increased steadily over the years in inverse proportion to quality and value. Anyway, this Bladnoch, distilled before the Armstrong era at Bladnoch (now also ended), was rather good indeed and at $89.99 it was an excellent value. I’d meant to buy a second bottle but never got around to it. Thankfully, I saved 6 ounces from the middle of the bottle for future reference. Even more thankfully, that sample did not go flat in the intervening years. Let’s get to it.  END_OF_DOCUMENT_TOKEN_TO_BE_REPLACED

I really liked the Binny’s Linkwood 16 I reviewed a month and a half or so ago (enough to purchase a full bottle after going through my share of a bottle split) and it’s about time I started acquainting myself more fully with this distillery’s output. This one is just a bit older than the Binny’s exclusive (via Signatory) but far younger than the 37 year old that is scheduled to arrive later this year as part of Diageo’s annual Special Release lineup. That one will probably cost around $1000 so even if this review is highly untimely it is no less useful than any reviews you will read in October or November of that 37 year old.

This was bottled by Chieftain’s, an Ian MacLeod label that doesn’t seem to be quite as ubiquitous in the US as it once was. Or maybe it still is and I’m just not paying attention—wouldn’t be the first time I didn’t know what I was talking about and also not the hundredth time.   END_OF_DOCUMENT_TOKEN_TO_BE_REPLACED

Mortlach has been in the news a lot this year with the launch of their hyper-expensive new line. Prices of indie casks from the distillery seem to also have gone up a little as a result. It will be interesting to see if things remain that way in the long run. Diageo may want to protect the new profile of their brand by making fewer casks available to the indies but if production is also going up (a big if) then more casks will become available anyway.

At any rate, this is not a recent release. It was released in 2011 by Ian Macleod’s Chieftain’s Choice label. This label used to be quite ubiquitous in the United States once upon a time, but I haven’t noticed too many new releases—not that that means very much given my general level of obliviousness and my disinterest in reading press releases and marketing materials. This was a bottle I thought hard about when it was first released but after tasting it at a Minneapolis store decided against it. I did love an older Mortlach bottled by Chieftain’s for K&L and so always wondered if I’d given unfair short shrift to this one. And so I’m very glad to be able to review it again from a large’ish sample.

END_OF_DOCUMENT_TOKEN_TO_BE_REPLACED

Here is another malt from Braeval, released well after the shift from the Braes of Glenlivet name. It was tasted right after the first (the 1977 from Glenhaven that I reviewed a couple of days ago). This was bottled by Chieftain’s, one of the independent labels of Ian Macleod who also own Glengoyne and recently Tamdhu. This was one of the first releases, I think, after Chieftain’s moved from 43% to 46% as their minimum abv. This is obviously from a different era than the Glenhaven; but it’s also from a different cask type than the Cadenhead’s 16, 1997 I reviewed last month. Will cask type or era make more of a difference? Let’s get right to it.

Nose: Quite similar to the Glenhaven at first but much less intense: honeyed malt, some citrus and apricot and a hint of toasted wood and cereals. The fruit gets a little deeper with time. With a lot more time the gunpowder from the palate emerges on the nose as well but it’s not dominant here.

Palate: Citrus first and then a wave of savoury gunpowder. Some hints of tropical fruit below that but it’s a little too thin. The gunpowder gets a little stronger and begins to cover up the fruit. Not a whole lot of development.

Finish: Medium. A little metallic at first and then there’s the gunpowder.

Comments: Well, this is not very much like the bourbon cask Cadenhead’s from the following year. At first it seemed like it was going to be similar to the 1977 but then the gunpowder showed up–especially on the palate. It’s not overpowering or offensive (though the sulphur-phobe might disagree) but it doesn’t work so well with the thin mouthfeel. And given the thinnness I didn’t add water tonight. Not bad–especially on the nose–but a little too simple–especially on the palate.

I have now reviewed (and tasted) three Braevals, and found none of them particularly whelming. Ah well, more research needed. 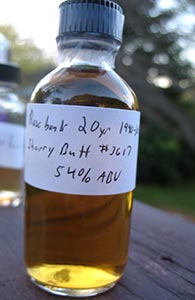 Okay, the cold is done. I’ve rechecked my nose and palate against a previously reviewed whisky (the Glen Moray 12) and I’m back. And I’m back in search of a Rosebank that might turn my head. This 20 yo from Chieftain’s is a bottle I’ve considered taking a chance on every now and then and I’m very glad I get to try it first. I’ve actually had a bit of it before–this at a tasting at a local liquor store (the Cellars) back in 2011 when this whisky was released. That tasting was conducted by one of the head honchos of Impex, the company that imports Chieftain’s and other Ian MacLeod whiskies to the US, and featured a number of the Chieftain’s releases from that year. The circumstances of the tasting were such that nothing made any impression on me. Actually, I lie. Something did make a strong impression on me and that was the conviction that I should never attend such a tasting again, and I never have. END_OF_DOCUMENT_TOKEN_TO_BE_REPLACED

Another Chieftain’s exclusive for K&L, this time a sherried Clynelish. And you’ll be pleased to know that this time David D.’s notes included no problematic content, which saves me from having to go on about it, and saves you from skipping past that part of this post, I mean, reading it very carefully. I’m being ironic, but in truth, I much prefer when the whisky is the only thing drawing my attention.

This was a bottle that I was interested in when it was first announced but as K&L don’t ship to Minnesota I thought I’d have to wait till I was in L.A next to get it and it was sold out by then. I only learned later that I could have purchased it online and had it held for pickup at the Hollywood store. Ah well, it’s not like I have a shortage of whisky on my shelves, and at least I get to taste some now.   END_OF_DOCUMENT_TOKEN_TO_BE_REPLACED

This Mortlach is a K&L exclusive selection via Chieftain’s. With characteristic understatement they inform that this is the best Mortlach they’ve ever found or ever will find again (every exclusive sold at K&L seems to be in that range); alas, with similarly characteristic lack of attention to detail they also say that the majority of Mortlach sold in the US by independent bottlers is from bourbon casks. Well, while there do seem to be a few recent releases from bourbon hogsheads and barrels of late, I can think of three sherried selections from Signatory and G&M for Binny’s alone in the last few years, and the somewhat dangerous 15 yo from G&M that’s the most ubiquitous Mortlach in the US is also sherried. In other words, sherried Mortlachs are not such unknowns in the US. Once again, accuracy loses to enthusiasm in K&L’s marketing.

But is this Mortlach better than all of those? Let’s see. END_OF_DOCUMENT_TOKEN_TO_BE_REPLACED