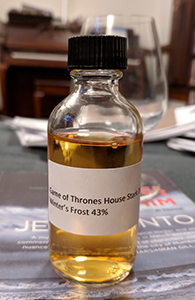 Following the second episode of the last season of Game of Thrones, here is my second review of Diageo’s Game of Thrones whiskies (here’s the first). This is the House Stark malt. You’d think a family from a region known for its dour character would get a more austere whisky but no, the House Stark malt is from Dalwhinnie, a distillery known for producing mild, inoffensive whiskies (think House Tyrell or House Tully). What should they have gotten? Probably Teaninich or Glen Ord (further north in the Highlands still than Dalwhinnie). Will this whisky have more development than we’ve seen in the plot of the first two episodes of the season? I can only hope. Don’t get me wrong, both episodes have been enjoyable, the second more so than the first; but with so much story still out there, and only four episodes left, it felt a bit maddening to not get very much more than yet more table setting. I’m guessing the battle of Winterfell and its aftermath will take up two episodes, leaving one for dealing with Cersei and co. and one for the overall aftermath. Which feels somewhat rushed. Well, I guess George R.R. Martin is mostly to blame. If he’d managed to put out just one more book in the last eight years we would have been save the oddly compressed structure of the last two seasons of the show. Anyway, let’s hope this whisky has better structure. END_OF_DOCUMENT_TOKEN_TO_BE_REPLACED