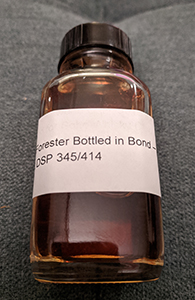 Let’s close out not-single malt Scotch whisky week, and also the month, with a bourbon review. The bourbon in question is the long defunct Old Forester Bottled in Bond. Now, there is a more recent Old Forester Bottled in Bond: the 1897 Bottled in Bond, which was released in 2015. But this is not that one. This is from an earlier period. As per my bourbon informants, the split DSP (Distilled Spirits Plant) numbers marked on the sample label indicates that this was made after 1980—as that was when the bourbon going into Old Forester began to be distilled at DSP 354 (the Early Times distillery). The split DSP, I am told, likely suggests distillation at plant 354 (the 345 marked on the sample label is a typo) and bottling at the old plant 414; and I think I was also told that these split DSP releases began to show up in the late 1980s. At any rate, this could not have been released after 1995 as that is when the old Bottled in Bond release went away. Now, why can’t I just ask the person who organized this bottle split if they know more about it? Well, because I have no memory of who I acquired this from or when. I’ve checked with likely sources and have completely struck out. So, if you have any more insight into this matter please write in below. And now let’s find out if the bourbon in the bottle is worth any of this fuss of trying to establish its provenance. END_OF_DOCUMENT_TOKEN_TO_BE_REPLACED