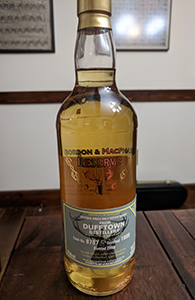 Okay, let’s cut back to the Speyside and stop in at a distillery I don’t know much about and have not tasted very much from: Dufftown. Part of Diageo’s massive portfolio, Dufftown is best known as one of the three distilleries in the Singleton series. I believe the Singleton of Dufftown was originally the one released in Europe, though now all three Singletons are apparently being released in all three major markets (Europe, North America, Asia). It pains me to say that I have not had very positive experiences in the past with the distillery’s output. I scored the Singleton of Dufftown a mere 76 points and a Signatory-bottled 18 yo from K&L didn’t fare very much better at 78 points. This 9 yo was actually distilled two years after that Signatory and was bottled by Gordon & Macphail for Binny’s. I’ve lost touch with Binny’s single cask program since they stopped shipping to Minnestoa (or out of Illinois for that matter) but back in the day I always had a high regard for their picks, especially of bourbon casks. Let’s see if this repays my trust. END_OF_DOCUMENT_TOKEN_TO_BE_REPLACED 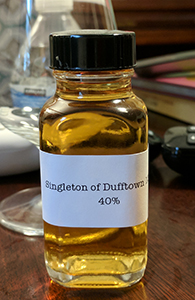 Ah yes, my second-ever Dufftown review and, indeed, my second-ever Dufftown. As I know no more about the distillery now than I did when I reviewed the other late last year, and as I already made my Homer Simpson joke on that occasion, I have nothing more to say about it. I will only register the faint hope that this may prove to be better than that K&L cask. The hope is faint because Diageo’s Singleton releases don’t really have strong reputations. They’re intended as entry-level malts and some would and do say that they pretty much taste like blend replacements, or as a way to get blend drinkers to pay a bit more for a single malt without risking turning them off. I believe all of the Singleton releases are 12 years old—which would make them competitors for the Glenlivet and Glenfiddich 12s. (In the US we get the Singleton of Glendullan. I think the Singleton of Dufftown goes to Europe and the Singleton of Glen Ord to Asia—I might have those swapped.) Anyway, let’s see what this one is like anyway.  END_OF_DOCUMENT_TOKEN_TO_BE_REPLACED 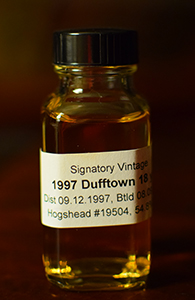 Ah yes, Dufftown, Homer Simpson’s favourite distillery. I know very little about it and in fact this is the first Dufftown I have ever tasted. I’ve had a G&M exclusive for Binny’s on my shelf for years now but have somehow never felt like opening it—isn’t this fascinating information?! More useful information from Malt Madness tells us that it is named for the part of Speyside it is located in: Dufftown. It has a number of other distilleries as neighbours but the most famous of them all is Glenfiddich. It’s a Diageo distillery, producing almost entirely for blends (Bell’s in particular). There is an official Singleton release but that’s pretty much it outside of the independents.

Anyway, I hope my first Dufftown will be a good one and that it will buck the trend of mediocrity set by the two other recent K&L Signatory exclusives (the Linkwood 19 and the Glenburgie 21, only one of which cracked 80 points).  END_OF_DOCUMENT_TOKEN_TO_BE_REPLACED