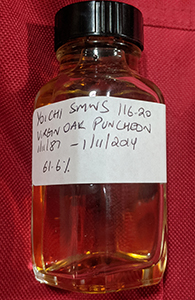 Okay, let’s make it three full weeks in a row of reviews of peated whiskies. Like Monday’s Ardmore and Wednesday’s Brora this does not feature full-throated Islay-level peat. In fact, it’s not from the Highlands or even Scotland. But it’s from a distillery whose whisky these days is as scarce as Brora’s: Yoichi, all the way from Hokkaido in Japan. Bottled by the Scotch Malt Whisky Society, this is easily the oldest Yoichi I’ve had—and it’s another sample that I have sat on for a really long time, for no reason that I can determine. I really liked the last 1987 I had (this 23 yo bottled by La Maison Du Whisky) and am hoping that this will be at least as good. The only thing giving me pause is that it was matured in a virgin oak puncheon: 26 years in virgin oak (if this wasn’t a finish) seems like a really long time. My suspicions of of the last virgin oak cask I reviewed (this Glendronach) were proved accurate and this one spent a decade and a half more in the cask. Let’s see if it somehow escaped the curse of over-active oak. END_OF_DOCUMENT_TOKEN_TO_BE_REPLACED 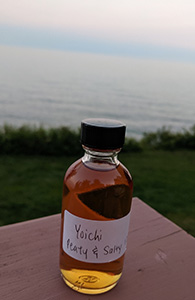 Peat week continues. Yesterday I had Batch 010 of the Laphroaig 10 CS. Today’s malt is 2 years older but was never as easily to hand as any iteration of Laphroaig 10 CS. I could be wrong but I believe this was only ever available at the Yoichi distillery; and as that’s on Hokkaido you’d have to be very dedicated to get to it. I have never been to Japan (except in transit), leave alone to Hokkaido and I did not get this at auction either (which is probably the only other place to find it now). I got it via a sample swap some years ago with a fellow whisky geek who had indeed made the journey to Hokkaido. I believe this and a number of others were made available at the distillery as so-called “key malts”, components that went into Nikka’s signature blends—others included “Sherry & Sweet” and “Woody & Vanilla”. I’ve reviewed a number of the other hard-to-get Yoichis I acquired in that sample swap but somehow forgot all about this one. I took the sample with me to Lake Superior earlier this month. I’d hoped to drink it on the rocks by the lake but the mosquitoes made short work of that fantasy. I drank it inside the cabin instead, looking at the lake through a window. Please construct your own metapor. END_OF_DOCUMENT_TOKEN_TO_BE_REPLACED 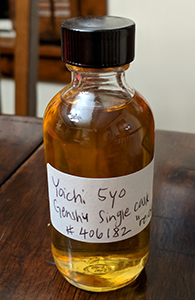 I reviewed a Japanese restaurant yesterday and will have a review of another Japanese restaurant tomorrow. Here in between, therefore, is a review of a Japanese whisky. This marks a dramatic return to my usual practice of pointless reviews (from the perspective of people looking for buying guides): not only is this Yoichi single cask no longer available, it was only ever available at the shop at the distillery—meaning you’d not only had to have gone to Japan to be able to buy it, you’d had to have gone to Hokkaido. I did neither of these things. This sample came to me through a swap, a couple of years ago, with a generous fellow whisky geek—he was also the source of the other Genshu casks I’ve reviewed: a 10 yo, a 15 yo and a 20 yo. I think these were all 500 ml bottles and that the full name of the series is “Taradeshi Genshu”. Who or what that refers to, I’m not sure, and the internet is not being of much help. If you know, please write in below.  END_OF_DOCUMENT_TOKEN_TO_BE_REPLACED 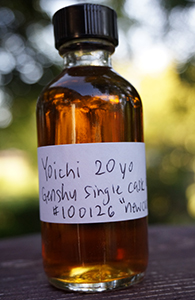 On Monday I reviewed the (now discontinued) Yoichi 20, which used to be part of the distillery’s core range. Here now is another Yoichi 20, this a so-called Genshu single cask, a series that, as I understand its, used to be/is only available at the distillery and at select bars in Japan. I’ve previously reviewed a 10 yo single cask, and also a 15 yo, in this series and have a sample of a 5 yo waiting in the wings as well. Well, let’s see how this one compares to the regular 20 yo.

Nose: Quite a bit peatier than the regular 20 yo: phenolic notes waft up through the sherry. The sherry is much richer and fruiter too (apricot, orange peel); some leather and brine and cured ham below that along with some pencil lead and just a hint of savoury gunpowder. Far less oak than in the other. After a couple of minutes there’s some toffee and a bit of maple syrup. Water knocks back the smoke and pulls out more toffee and fruit (some plum now with the apricot); some slightly dusty oak too now. Not much change with the added drops of water.

END_OF_DOCUMENT_TOKEN_TO_BE_REPLACED 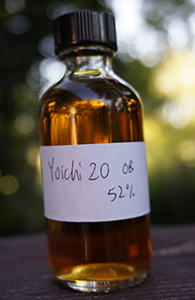 The Yoichi 20 used to be the oldest malt in the distillery’s core range. I say “used to be” because it has been discontinued (and it never made it to the US). As you are probably aware, there is a tremendous shortage of aged Japanese whisky. Between declining stocks and sharply rising prices, quality aged Japanese whisky is more and more out of the reach of regular drinkers. Which is not to say that the Yoichi 20 was ever affordable. Even four years ago it was well north of $200 for a bottle. Keep in mind that at that time you could still find the Yamazaki 18 in the neighbourhood of $100. This is probably due to the fact that in 2008 a 1987 vintage edition of the Yoichi 20 won a major award, right around the time that Japanese whisky began to become hot. Pretty much every release since has received rave reviews, though it’s not always easy to tell non-vintage releases apart*. Anyway, I’ve long wanted to try it and am glad to be able to through a sample swap. END_OF_DOCUMENT_TOKEN_TO_BE_REPLACED 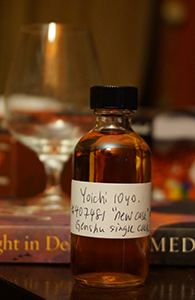 I don’t have very much experience with Yoichi. The few that I have reviewed are the only ones I’ve had. I do have a few more on hand thanks to some sample swaps and my experience will have doubled or tripled in the next month. One of the three that I have reviewed was another of these “Genshu” single casks, a 15 yo—I believe this series of single casks is only available at the distillery (and heartfelt thanks again to Gimmeadram who was generous enough to share a number of samples from the bottles he got on his visit there). I found  that 15 yo single cask to be a bit of a departure from the regular release 15 yo. As I’ve not had any other younger Yoichi I’m not in a position to compare this 10 yo Genshu cask to anything else. I did want to get to it though before tasting the older ones I have on tap for either later this month or in July.

Anyway, let’s get to it.

END_OF_DOCUMENT_TOKEN_TO_BE_REPLACED 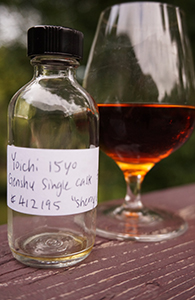 I don’t really know too much about this whisky. I believe it’s available only at the distillery (and considering Yoichi is on Hokkaido, that’s a bit out of the way for regular visitors to Japan). It is said to be both a single cask and a vatting so there might be some Glendronach-style shenanigans going on. Anyway, that’s enough non-information for me. On to the whisky!

Nose: Raisins, dark rum, mild caramel, some cola concentrate. Dried tangerine peel comes up from under followed by some salt and some savoury notes (a wisp of gunpowder, salted nuts, ham) and some graphite. Textbook heavily sherried whisky with nothing tannic about it. With more time the citrus expands quite a bit. With water the salt expands (salted nuts) and it brightens up in general. Then sweeter, richer fruit starts appearing on the nose—cherry and plum at first and then some apricot jam. And after a bit it’s as though that sticky fruit’s been applied as a glaze on some roast pork. END_OF_DOCUMENT_TOKEN_TO_BE_REPLACED 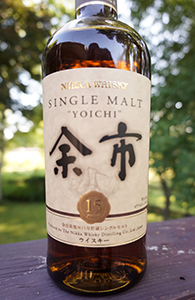 This Yoichi 15 (now in the US, albeit not at a friendly price) is a bottle that I plan to follow over its life on the blog. This first review is from a freshly opened bottle (the very first pour, in fact). I will follow up after the bottle’s been open for some time and drunk down a bit, then at the halfway point, and then a couple more times before the end. I expect it will take me more than a year to finish the bottle. If changes are not significant I will merely add notes in the comments to this review. If a full review seems warranted I will post one. In such a case the new review(s) should not be viewed as a correction or replacement of this one but merely as another iteration.

Nose: Starts out with salt and some minerally, very slightly gunpowdery smoke. Some polished wood below that with salted nuts and sweeter notes (plum sauce, apricots). After a bit there’s a peppery, olive oily note as well but as it sits it becomes all about the fruit, with citrus (orange) joining the party late. END_OF_DOCUMENT_TOKEN_TO_BE_REPLACED 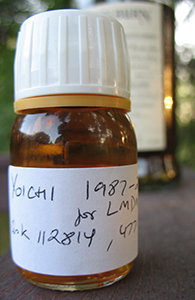 The run of reviews of sherried whiskies continues but with this Yoichi single cask I also begin a mini-run of Japanese whiskies.

Nikka and Suntory are the heavyweights in the Japanese whisky industry. And Yoichi is to the Nikka stable of distilleries/brands what Yamazaki is to Suntory’s: the featured player. In the last year a few of Nikka’s whiskies finally made it to the US market: the excellent Yoichi 15 and the vatted malt, Taketsuru 12. Very recently, a few more have joined that initial pair: Taketsuru 17 and 21 (a review of an earlier iteration of the latter is coming soon), a 12 yo from Miyagikyou, Nikka’s other malt distillery and a single grain. The pricing on all of these, unfortunately, has not been recession-friendly. I shudder to think of what we would be asked to pay for the more prized Yoichi single casks such as the one I am reviewing today. This was bottled in 2010 by the famous French store/importer La Maison du Whisky. END_OF_DOCUMENT_TOKEN_TO_BE_REPLACED