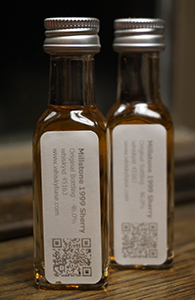 Continuing my tour of award-winning whiskies here is Whisky Advocate’s “World Whisky of the Year” for 2012 (okay, so my timing is a little off). No, not the best whisky in the world for 2012—the “world” for Whisky Advocate means “not American, Scottish, Irish, Canadian or Japanese”, and this was from a Dutch distillery named Zuidam, who are better known for all the other spirits they produce. As the category includes Kavalan and Amrut you’d expect anything winning here to be of high quality, but it’s also possible that after giving the award to Amrut in 2010 and 2011 Whisky Advocate decided to go all Jim Murray on people. Further evidence for this theory: after a nod to Kavalan in 2013, last year’s award went to some Austrian whisky called Broger Burnout; no, I haven’t had it, and for all I know it’s great stuff, but I am prepared to say anyway that there is a good chance that Whisky Advocate is trying a bit too hard. Anyway, the 93 point score the Milllstone 12, 1999 got from Dominic Roskrow on Whisky Advocate is some distance away from its current average of 82 points on Whiskybase. I’m sure people made as much fuss about this discrepancy back then as they do every year about Murray’s selections. END_OF_DOCUMENT_TOKEN_TO_BE_REPLACED