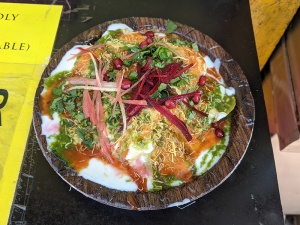 We returned from India on the 4th of February. It is now almost the end of August. The time seems right to finally post the last of my meal reports from our trip. This report encompasses one of our first meals out in Delhi on this trip as well as our very last meal out in Delhi; in between is a spot of eating in Calcutta. All these meals have one thing in common: chaat. As I noted many years ago in my first report on chaat on the blog (which you really should read), chaat is one of the genres of food I miss the most, living outside India, and it is one of the things I make sure to eat as much of as I can when I do go home to visit. END_OF_DOCUMENT_TOKEN_TO_BE_REPLACED

Here, finally, almost exactly six months to the day we left the city, is my last meal report from Calcutta. It’s not a meal I’d thought we’d have before the evening of but it’s a meal I’m glad we had and a meal we enjoyed—none of which is to say that the food was anything special. That probably sounds enigmatic but don’t worry I’m about to tell you what I mean. Mocambo is one of a few establishments located on or near snazzy Park Street that have been around since near the middle of the 20th century and which have together formed a locus of a particular kind of wealthy Calcutta cosmopolitanism. Names like Peter Cat, Bar-B-Q, Trincas and Mocambo have both evoked nostalgia for a long time for the city’s elite and maintained their popularity even as a new generation of restaurants and, in particular, restaurants serving Bengali cuisine, have sprung up around them. These were aspirational places in the 1970s and 1980s—before the rise of 5-star hotel restaurants—and Mocambo, the place that more than any other defines Calcutta Continental food, continues to be packed on weekends in early February well into the 21st century. END_OF_DOCUMENT_TOKEN_TO_BE_REPLACED 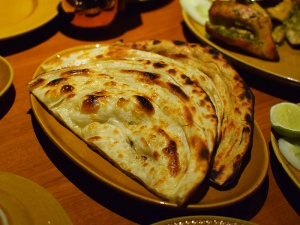 Yes, we went to Calcutta from Delhi and ate North Indian food. Given the fact that in the last couple of decades there’s been an explosion of Bengali restaurants in Calcutta this may seem like a particularly silly thing to do. But we ate one meal a day at the home of one aunt or the other every day while we were there, and so we were not really hurting for the hardcore Bengali food experience. And then one of the events at the wedding we were in the city for had food catered by Peshawri, the North Indian restaurant at the ITC Sonar Bangla; and it was so goddamned good we decided we’d spend one of our meals there rather than go to 6 Ballygunge Place or some other restaurant whose food would be excellent but couldn’t compete anyway with what we’d been eating at the homes of various aunts. And a good choice it was too. END_OF_DOCUMENT_TOKEN_TO_BE_REPLACED

Indian Chinese food, as I’ve said before, is arguably the country’s true national cuisine. (I am speaking here not of the more recent, putatively more “authentic” Chinese food that has made inroads into the higher end of the market in major metros but which has a more limited reach.) This is true in two senses. It is available all over the country—in large cities and small towns, from fancy restaurants to street stalls to dhabas in the middle of nowhere—and has been for many decades. And it is a cuisine that at this point has been adopted without much/any rancour in every part of the country it has gone to (which is to say, again, to every part of it). This latter cannot be said, for example, of North Indian restaurant food—which is also everywhere but whose popularity inspires grumbling in many places outside North India. The only other contender is South Indian food of the idli-dosa-vada-sambar kind (I refer to it generically because that’s largely how it’s presented and received outside the South)—but that has never quite shed its (broad) regional origins. Indian Chinese food, on the other hand, is now of everywhere and from nowhere. And in most places there are no Indian Chinese people actually associated with preparing or serving it. END_OF_DOCUMENT_TOKEN_TO_BE_REPLACED

I finished up with my Goa reports from January two weeks ago. All that remains from that India trip are a few reports from Calcutta, which is where we went directly from Goa. We were there for just short of a week for a family wedding. For the first few days we were put up at one of Calcutta’s many hoity toity private clubs, the Tollygunge Club. The father of the bride is an ex-president of the club and set this option up for everyone from the bride’s side of the family who wished to partake. This was an opportunity I was all too glad to seize as I’ve had a morbid fascination with these clubs since I was a young boy—never having seen the inside of any except the Tolly on a few occasions as a teen, as the guest of either said ex-president of the club or of wealthy classmates from the boarding school I went to in Darjeeling in the 80s. END_OF_DOCUMENT_TOKEN_TO_BE_REPLACED