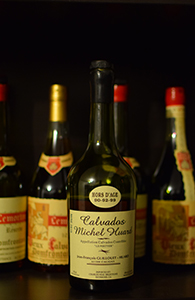 Charles Neal, author of the only book on Calvados you need purchase, says of Huard that it is to AOC Calvados sub-region/appellation what Camut is to the Pays d’Auge and Lemorton to the Domfrontais: the most admired of its producers. Then again, Charles Neal is the US importer of Huard so he might be a little biased. I purchased this from Astor Wines in New York (I’m not sure if it’s an exclusive). It is a blending of Calvados from three vintages: 1990, 1992 and 1999. That is to say, the youngest Calvados in this blend is 16 years old and the oldest is 25. Astor is currently selling it for about $60. I mention the age and the price because they’ve particularly been on my mind since my friend Sku posted reviews on Monday of two teenaged Calvados imported by Nicolas Palazzi, a 16 yo and a 18 yo that are selling for $200 and $225 respectively (also at Astor): more than three times the price of this Huard. Sku raves about those Calvados but didn’t have much to say about the price in his review.  END_OF_DOCUMENT_TOKEN_TO_BE_REPLACED

After two weeks of Armagnac let’s go back to Calvados Wednesdays for a bit. You may recall that my first Calvados review was of the new release of Domaine Hubert from K&L. You may also recall that I expressed some skepticism about the claim that this was essentially the same as their original release of Domaine Hubert, which had a vintage stated and was 6-7 years old. It certainly didn’t taste like it was very much more than four years old. Well, Florin, winner of the second season of Celebrity Apprentice, is a big fan of that 2006 Hubert and insisted that I try that one as well. (By the way, I’d sent him a sample of the new Hubert and he shared my reservations about it, though he did like it more.) He gave me a sample and here I am now with a review. I tasted it alongside a pour of the recent version. It couldn’t be done blind because the difference is obvious before you even taste them: the 2006 vintage is much darker—make of that what you will…
END_OF_DOCUMENT_TOKEN_TO_BE_REPLACED 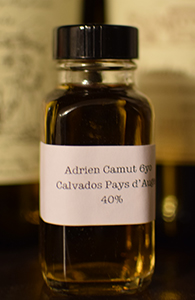 Camut is perhaps the most famous and renowned of all the Calvados houses. As per Charles Neal, the family has been making Calvados for seven generations now and Adrien Camut was instrumental after the 1960s in the promotion of Calvados as a spirit to be taken seriously. He also apparently made a number of technical innovations in the production process that led to other producers asking him to make stills for them. (He passed away in 1989—the domaine is now run by his grandsons.) But Camut is not just important historically; their Calvados has a very high reputation. In fact, when I began to express an interest in Calvados, more than one person—Sku among them—urged me to try Camut as one that I would be sure to like. I’m now finally getting around to it. I’ll be curious to see if the pride of the Pays d’Auge challenges my current preference for the pear-heavy Calvados of the Domfrontais. My understanding is that most producers in the Pays d’Auge use far less than the 30% poire content that is the maximum allowed for the Pays d’Auge appelation—and given the fact that pears are mentioned not at all in Neal’s entry on Camut in his otherwise comprehensive book, I suspect that Camut might be one of the producers who use no pear at all. If you can confirm or dispute this please write in below.  END_OF_DOCUMENT_TOKEN_TO_BE_REPLACED

I really enjoyed the Lemorton Réserve and so I am really looking forward to this much older iteration. Especially as in his wonderful book on Calvados (which, yet again, I recommend highly) Charles Neal has high praise for older Lemortons. Granted he is speaking of vintage releases from the 1970s but still. I am curious to see if this will be closer to its much younger sibling or to the 18 yo Bordelet-Beudin I reviewed last week. I quite liked that one but noted that it seemed in many ways to be closer to bourbon and wine cask-matured malt whisky than to younger Calvados (as always, note the caveat of my very limited Calvados exposure); it was also quite oak-driven. Will all that be even more true of this even older Calvados? Let’s see.

This was bottled for Astor Wines in New York and at $125 is about half the price of the 18 yo Bordelet-Beudin.  END_OF_DOCUMENT_TOKEN_TO_BE_REPLACED 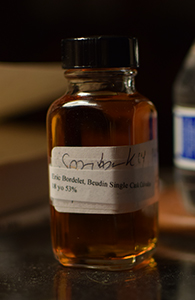 If this Calvados has a bit of a mouthful of a name it’s because it has a complicated origin. It was bottled by Eric Bordelet, who makes Calvados but it wasn’t distilled by him. Henri Beudin is apparently his neighbour. Beudin does not, however, make an appearance in Charles Neal’s great book on and guide to Calvados (which is rather comprehensive and which, again, everyone should buy). This suggests that Beudin is not a regular Calvados producer. Bordelet, however, is in the book, but at time of publishing (in 2011) he was not yet bottling his own Calvados, “as he feels many of his spirits are still too young” (Neal, 562). He is a renowned maker of cider, however, and I’ve heard very good things about his cider, some of which is available in the US. Bordelet, and presumably his neighbour, Beudin, are in the Domfrontais region but Neal reports that Bordelet double-distills his Calvados—I’m not sure if this is true of Beudin as well. If someone who has a bottle could clarify if this is mentioned on the label (or if the Domfrontais appellation is used, which would require single distillation) that would be great. All I have is this sample, which Sku kindly shared with me—he really liked it and I’m interested to see what I make of it. At 18 years of age, it’s the oldest Calvados I’ve yet had.  END_OF_DOCUMENT_TOKEN_TO_BE_REPLACED

Here is another K&L exclusive Calvados (after the Hubert) and another from the Domfrontais (after the Lemorton Reserve). This is another whose age is not stated, only alluded to. Sku, from whom I got this sample, notes in his review that “while there is no age listed, K&L tells us it is five years old”. Florin pointed out in the comments that the label states the “Réserve” category which is used for three year old Calvados and wondered why they wouldn’t have used the higher category if it were indeed five years old (“VSOP” or “Vieille Réserve”). Sku noted that he “spoke to K&L and they assured me that it is 5 years old, distilled 2011. Apparently, they used existing, available labels rather than create a new one to get it done more quickly.” I found this explanation from K&L a little unconvincing and said so there but I’ll repeat myself here (I’m good at repeating myself and believe in sticking with my strengths).  END_OF_DOCUMENT_TOKEN_TO_BE_REPLACED

Here is my second Calvados review. For the first, and for a bunch of disclaimers about the status of my Calvados reviews, see here. I was not a big fan of that Domaine Hubert from K&L. I purchased this Lemorton Reserve from K&L as well but it is not exclusive to them. K&L’s site describes this as a six year old too, but, as with the Hubert, there’s no age statement anywhere on the label, and elsewhere I have seen it referred to as a five year old. And the website of the importer, Charles Neal (who is also one of the pre-eminent authorities on Calvados), also mentions a five year old but not a six year old blend (let me take this opportunity to again recommend Charles Neal’s massive guide, Calvados: The Spirit of Normandy). I’m not sure why there has to apparently be so much mystery/confusion about the age of Calvados. Or is this merely my Scotch whisky conditioning further revealing itself?  END_OF_DOCUMENT_TOKEN_TO_BE_REPLACED

As I said on July 1, I am very new to Calvados. As such even though I’ve already made disclaimers about the nature of my Calvados reviews (there’ll be at least three this month), I’m going to make them again.

In brief, I am the furthest thing from an expert on Calvados. I am also pretty far from being an expert on Scotch whisky but in that case I know a decent amount about the history of Scotch whisky; I know quite a bit about different styles of Scotch whisky and the likely effects of variables in the production process; I know a fair bit about a bunch of the major distilleries and the profiles they’ve produced over time; and I certainly know when a whisky has flaws (whether it overcomes them or not) and when it has achieved very desirable characteristics. In the case of Calvados, I currently know only whether the one I am drinking appeals to me. And since my palate is conditioned by single malt whisky (which is also very relevant to my reviews of American whiskey) it may well be the case that what appeals or doesn’t appeal to me about a particular Calvados may have little relationship to the qualities looked for or scorned by connoisseurs of Calvados. (Among other things, I also don’t know what the plural of Calvados is: one Calvados, two Calvadoses? Calvadosi? Calvadeaux?)  END_OF_DOCUMENT_TOKEN_TO_BE_REPLACED