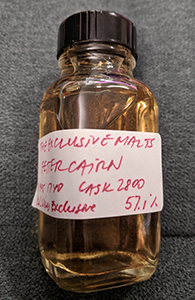 I keep saying this about most of the minor Scottish distilleries but I have very little experience of Fettercairn. I’ve only reviewed a couple of them before this one and have maybe tried twice as many in total. As such I have no expectations. Of the two I’ve reviewed one did nothing for me and the other was average—which leaves the door open for this one to be the first Fettercairn that will really move me. Okay, so it also leaves the door open for this to be the first Fettercairn I end up pouring into the sink—why do you have to be so negative?

This particular Fettercairn was bottled by Exclusive Malts for K&L in California. Being negative, you might say that this is not a very promising combination but I have had very good whiskies from both. Let’s see if this is another one of those. END_OF_DOCUMENT_TOKEN_TO_BE_REPLACED

Fettercairn is not located far from my last stop, Glencadam, and may perhaps be even less beloved a distillery. They’re owned by Whyte & Mackay, who also own Dalmore and Jura, and who are in turn now owned by the Phillipines-based Emperador Inc. They don’t put out very much malt whisky. They released a series of older malts in 2009—a 24 yo, a 30 yo and a 40 yo—but I don’t believe these were regular releases. The Fettercairn Fior, which was first released in 2010 or so, and which contains a fair bit of peated malt may, however, still be a going concern (it’s not available in the US). I assume they’re mostly producing for Whyte & Mackay’s blends. Anyway, all unloved distilleries are more than capable of of producing excellent single casks. And while none of the other Cadenhead’s releases from this early 2017 outturn (from Balmenach,  Pulteney, Aultmore and Glen Spey) that I purchased samples of alongside this one in London in May turned out to be excellent, hope springs eternal.  END_OF_DOCUMENT_TOKEN_TO_BE_REPLACED

I’ve said rude things about distilleries such as Deanston before; but where Deanston is merely held to be inoffensive, Fettercairn is openly scorned by many whisky geeks. The only other malt I’ve had from them was in fact quite well received but I thought it was just a bit above average: the Fior from a couple of years ago. Of course, reputations are unreliable; sometimes they rest on past sins/laurels, and even where justified on the whole are never descriptive of every cask of whisky that’s come out of a distillery. On this blog I’ve previously noted very positive experiences with malts from Loch Lomond and Miltonduff, both of which have poor reputations on the whole as well; will this Fettercairn be an outlier like those may have been?