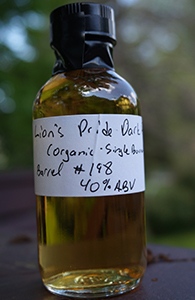 Koval is a small distillery in Illinois who’ve released a number of whiskeys made from 100% mashbills of various kinds of grains (there’s also oat and millet) as well as a bourbon which has millet in place of the usual rye and barley complement, and a four grain whiskey from oat, wheat, rye and malted barley. They currently also have an aged 100% rye and a 100% white rye but this Dark Rye (I don’t know what “dark rye” is) doesn’t seem to be part of their current/continuing lineup. So, clearly they’re doing interesting stuff—but is it any good?

It’s not just the Dark Rye that’s gone, by the way. Their current releases don’t sport the “Lion’s Pride” moniker either. I believe the early releases were all dubbed Lion’s Pride for the owners’ son who is apparently named Lion.

Lion’s Pride Dark Rye (40%; Barrel 198; from a sample received in a swap) END_OF_DOCUMENT_TOKEN_TO_BE_REPLACED