Is this my first review of a whisky from the Speyside distillery? I believe it is. And I believe it is also the first (and only) whisky I’ve ever tasted from the Speyside distillery—it was only founded in 1990 and its first single malt release was in 1999. My only other exposure to anything related to this distillery is the independent bottler, Scott’s Selection: the Scott of Scott’s Selection, Robert Scott, was Master Blender at the Speyside distillery. I’m not entirely sure but I think Scott’s Selection—which I think is now defunct—was in fact a property of Speyside, which means that they are one of few distilleries that also operate as independent bottlers. Bruichladdich/Murray McDavid and Benromach/Gordon & MacPhail are few of the others that come to mind as similar examples, past and present, though Bladnoch under Raymond Armstrong is probably the nearest analogue. Doubtless there are others (please write in below). The distillery also produces the Drumguish and Cu Dubh brands.  END_OF_DOCUMENT_TOKEN_TO_BE_REPLACED

Old Longmorn (especially from the late 1960s and early 1970s) is usually utterly brilliant stuff—see here and here, for example—but I’ve not had quite as much luck with more recent/younger Longmorn, whether official or independent—see here and here (and here for an exception). As to whether this is just the luck of the draw or whether Longmorn’s spirit reaches its peak at a much later age, or if there was something crucially different about that earlier period, I don’t know. I do know that this 11 yo from the German bottler Alambic Classique does not lift the average of recent/young Longmorns.

I bought it a while ago and opened it a couple of months ago for one of our local group’s tastings—and while no one hated it, it didn’t really ring anyone’s bells either. For that reason, mostly, I’ve been putting off returning to review it despite having listed it in my “Coming Soon…” forecasts for quite some time now. But here I am now. END_OF_DOCUMENT_TOKEN_TO_BE_REPLACED

More than a year ago I reviewed an absolutely exquisite sherried Ledaig 40, 1972 from the German bottler, Alambic Classique. I thought that was one of the very best whiskies I tasted last year. Here now is a challenger from the same distillery and bottler: an even older Tobermory (Ledaig, as you probably know, is the name of the peated whisky made at Tobermory). This one is 41 years old and like the Ledaig is also from a single oloroso sherry cask. Even though I deeply regretted not buying the Ledaig when it was released—by the time I tasted the samples I bought it was long gone—I did not spring for a full bottle of this one either: both because it was very expensive and because my few experiences with Tobermory have not been as good as the one I’ve recently had with Ledaig. I’m hoping this tasting doesn’t make me feel stupid (especially as current Tobermory is no basis for making judgements about 1972 Tobermory). END_OF_DOCUMENT_TOKEN_TO_BE_REPLACED 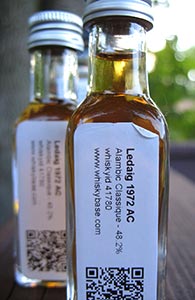 Ledaig is the name of the peated whisky produced at the Tobermory distillery on Mull–the unpeated is sold under the Tobermory name. The distillery was originally founded as Ledaig, however, and I’m not sure when Tobermory became the official name. I don’t have a whole lot of experience with the whisky, of either type, made at this distillery. There has not been a whole lot of it available in the US and what has been has not always had the strongest reputation. This has especially been true of contemporary Ledaig. However, I’ve recently had some young indie Ledaigs that were quite nice and so when I saw samples of this far more ancient (from an earlier era, and very old) Ledaig were available I could not resist. The bottler is Alambic Classique, another German bottler with a good reputation.
END_OF_DOCUMENT_TOKEN_TO_BE_REPLACED