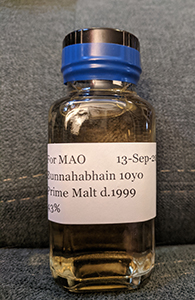 One last peated-sherried malt to close out the month. This one is unlike the others I’ve reviewed this month. For one thing it’s not from a distillery known for its peated malt, at least not at the time at which this was distilled, back in 1999. While Bunnahabhain now puts out official releases of peated malt, independent bottlers used to be the only sources of peated Bunnahabhain from this era. I’ve had a few 1997s that were peated (see here, here and here) but this will be my first 1999, I think. This is also not a heavily sherried malt—it’s from a refill sherry cask and the colour of the whisky suggests it was a long way from being a first-fill cask. The bottler too has no real reputation. In fact, I’m still not sure who was behind Prime Malt which put out a number of releases in the US in the 2000s. I was under the impression that Duncan Taylor were the source but Whiskybase lists the bottler as Gordon Bonding and I have no idea who they are/were. If you know more about them please write in below. In the meantime let’s get to this whisky. END_OF_DOCUMENT_TOKEN_TO_BE_REPLACED 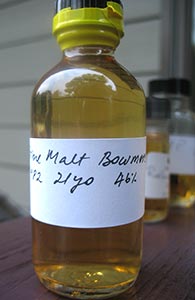 Yes, a bottle from the very beginning of Bowmore’s dark period in the 1980s (see here for my thoughts about all of that and for a review of an underwhelming official bottling from the tail end of the decade). This is from a mysterious outfit called Prime Malt who seem to have only operated in the US. Michael Kravitz has more information about them in the fourth paragraph of his review of this same whisky and also in the comments (he got his sample from the same source: Florin who comments often on both our blogs). This one was billed as “Prime Malt Selection No. 4”; I’m not sure how many selections there were from this bottler/label.

The last 1982 I tasted–(also) from Duncan Taylor–had the notorious soap on the palate and finish but no real offensive perfumed notes. Will this one be any better or worse? END_OF_DOCUMENT_TOKEN_TO_BE_REPLACED