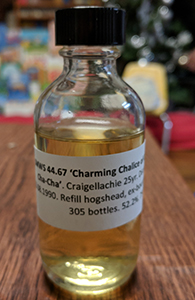 Let’s do another 25 yo today. Unlike Monday’s Caol Ila 25 from the Bladnoch forum, this was not bottled almost a decade ago. Which is not to say it is a very recent release: it was bottled in 2015 or 2016. It’s also an independent release, this time from the Scotch Malt Whisky Society. They gave it the “fun”, or more accurately, highly stupid name, “Charming Chalice of Cha-Cha-Cha”—which means that this is the rare occasion when one prefers to use their complicated coding system to refer to the cask. Said cask was a refill hogshead and represents the oldest Craigellachie I’ve yet tasted. It’s also the first ex-bourbon Craigellachie that I’ve tasted. As such, I have no expectations.

Looking forward yet again to our trip to the Speyside this June, I should ask if anyone particularly recommends an in-depth visit to Craigellachie. My plan is to do drive-by visits of a number of distilleries in that general area—Craigellachie among them—and only tour Aberlour. (Elsewhere in the Speyside, I will probably tour Benromach, Glen Moray and Glenfiddich). Again, as this is a family trip, I will be restricting myself to a single tour on the days that I do visit distilleries. Anyway, on to this Craigellachie!  END_OF_DOCUMENT_TOKEN_TO_BE_REPLACED 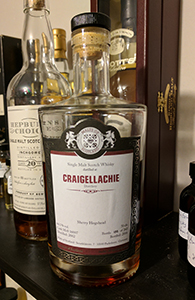 There’s an official Craigellachie 13; this isn’t it. This is a 13 yo single sherry cask bottled by the German outfit, Malts of Scotland. The cask in question was a hogshead which means even more wood contact (and the colour would seem to corroborate this). And the abv is an eye-watering 60.5%.

If someone tries to tell you that Craigellachie makes sherried malt in the style of Macallan or Glenfarclas or Glendronach, you might check to see if they’re trying to sell you something. While individual casks might tend in the softer direction of those classic Speyside distilleries (which, of course, command good prices—probably the reason someone trying to sell you on the idea might bring their names up), Craigellachie has traditionally produced a meatier, earthier style of sherried whisky. The better comparison is to Mortlach. Such, for example, was this 20 yo, also bottled by Malts of Scotland, and this 18 yo bottled under the Hepburn’s Choice label for K&L. And such is this 13 yo—I opened the bottle for one of my local group’s tastings and drank it down pretty fast.  END_OF_DOCUMENT_TOKEN_TO_BE_REPLACED 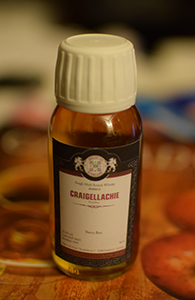 The last sample of a sherried 20 yo from Malts of Scotland that I reviewed—this Mortlach—made me rue that I had not gotten around to tasting it while the bottle was still around. Will that be true of this Craigellachie as well? It’s odd to say that I hope so, but I don’t want to be rooting for a bad review either!

Craigellachie, like Mortlach, used to be pretty obscure until their owners decided to take them mainstream with a line of official releases. Because it is owned by Bacardi and not Diageo the prices for this line are not obscene. At least the 13 yo and and the 17 yo are reasonably priced—the 23 yo is pretty expensive (though still about half the price of the Mortlach 25 yo). Indie Craigellachie is a far more reasonable affair and single sherry casks more fully demonstrate the meaty character of the distillate (which it also has in common with Mortlach). Well, let’s see what this is like.  END_OF_DOCUMENT_TOKEN_TO_BE_REPLACED 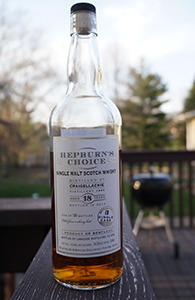 I don’t have very much experience with Craigellachie; in fact, I’m not sure if I’ve had anything other than this G&M bottling for the Party Source. As with Diageo’s Mortlach, Craigellachie produces a heavier, meaty spirit and the G&M cask I tried was as close to Mortlach as I’ve come from any other distillery. I did like that one quite a bit and so have been on the look out for more since: of course, there hasn’t been very much of it around—especially in the US—since, as with so many distilleries, it mostly produces for blends (it is a core component of the Dewars blends). The owners, Bacardi announced last year that they would be launching a new range of single malts from Craigellachie. The new 13, 17 and 23 year olds have been well-received, on the whole, but from what I can tell they’re not deeply sherried brutes. And so when K&L announced this single sherry cask I put aside my misgivings based on their 2013 selections and got a bottle.

Well, I opened it for my local group’s April tasting and it was quite popular. Due to the vagaries of schedules we actually did two small group tastings separated by a couple of weeks, and while I liked it fine the first time, I liked it even more on the second occasion. Let’s see what I think of it now that it’s been open for about a month. END_OF_DOCUMENT_TOKEN_TO_BE_REPLACED

Craigellachie is yet another distillery of which I know little, except that it is a workhorse, high-volume distillery in the Speyside whose malt is available only from independent bottlers. The bottle I am tasting tonight is from Gordon & Macphail (who else) and was specially bottled for the Party Source, an excellent store in Kentucky. I have tried only a handful of the Party Source’s private selections, and while they’ve all been solid, none have truly blown me away (unlike, say, some of Binny’s–a Signatory Laphroaig 19, 1990 comes to mind, but that’s neither here nor there). On to the notes!
END_OF_DOCUMENT_TOKEN_TO_BE_REPLACED