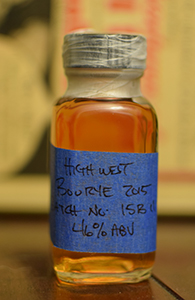 The first release of High West’s Bourye was in 2010. As Sku tells us, this was not the first blend of bourbon and rye (hence the name—everybody at the company must have been very tired that day) but it was the first premium blend of bourbon and rye. It was very well received (I wasn’t drinking much American whiskey then myself). I’m not sure how many more releases there have been of it since. In his review of a 2016 batch Sku refers to “the return of Bourye”, but this sample is from a 2015 release. If anyone knows more about this please chime in below. And please chime in as well if you know what exactly the 2015 release is a blend of. [Update: see the comments.]

I’ve not had very many of High West’s releases and while I’ve liked all I’ve tried a fair bit, I’m yet to have one that I’ve truly been blown away by (i.e nothing has made it to 90 points in my system). But I do appreciate that, unlike so many new American distilleries they don’t just release re-labelled sourced whiskey with only a tedious story tacked on to it. Anyway, let’s see what this is like.  END_OF_DOCUMENT_TOKEN_TO_BE_REPLACED 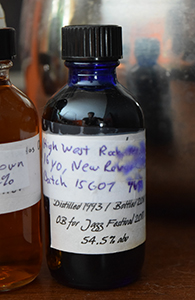 I have previously reviewed Batch 2 of High West’s Rocky Mountain Rye, which was a 21 yo. (I’m assuming that the batch number here refers to the “Rocky Mountain Rye” part generally and doesn’t mean that there have been 14 previous releases of a 16 yo Rocky Mountain Rye—as always, my knowledge of American whiskey is profound.) That one was a “barely legal” rye with 53% rye in the mash bill. This one, a blend of two ryes, is at the other end of the continuum: as per the distillery’s website*, one of the components was from a 95% rye mash bill from LDI and the other was from a 80% mash bill from Barton. Of note is that the 95% mash bill did not contain any corn (I’m not sure if this is common with ryes). (It’s not clear what the proportions of the two components are in the blend.) Also of note, is how transparent High West are about where they’ve sourced their whiskies from. More American distilleries/brands should follow their lead.  END_OF_DOCUMENT_TOKEN_TO_BE_REPLACED

I tasted this in late December at the home of Fabulous Florin (head of small animal husbandry at the San Diego Wild Animal Park) and do know that I liked it a lot; more, I think, than I had the Rendezvous Rye itself. I’ve since found a store in the vicinity that has a bottle and so I’m interested to taste it again and see if that initial impression is confirmed.

END_OF_DOCUMENT_TOKEN_TO_BE_REPLACED 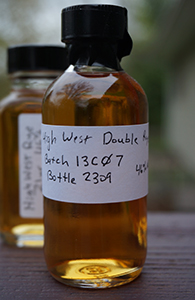 Following yesterday’s review of their 21 yo, here is another rye from High West, this time their Double Rye. With an age statement this would be a 2 yo: it is a blend of a 2 yo from a 95% rye, 5% barley mashbill and a 16 yo with a “barely legal” 53% rye, 37% corn, 10% barley mashbill. Not sure of the proportions but this is a similar concept in many ways to their Rendezvous Rye but with a younger whisky at one end (6 yo in the case of the Rendezvous) and a lower rye mashbill at the other end (the 16 yo used in the Rendezvous was 80% rye).

High West Double Rye (46%; from a sample received in a swap)

Nose: An interesting nose, with obvious rye notes (dill) but also richer, warmer notes of orange, leather and even a bit of ginger in place of the usual cinnamon/clove complex. At least at first. With a bit of airing there’s a fair bit of pine/eucalyptus and a sweetness somewhere between sappy, rooty and herbal. But the aromas are still pretty “warm” rather than the usual rye “cool”. A couple of drops of water bring out more (powdered) ginger. END_OF_DOCUMENT_TOKEN_TO_BE_REPLACED 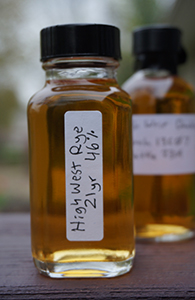 I’ve made fun of High West a little bit before in my review of their Rendezvous Rye, but I did enjoy it and also my batch of their Campfire (a blend of bourbon, rye and peated Scotch). And I must also admit that my teasing was somewhat unfair as High West is quite upfront about the fact that the whiskies they are releasing while their own matured spirit comes online do in fact originate at other distilleries. That is to say, High West do not really represent the honesty gap on display in so many parts of the American whiskey industry. And so I’m not going to make fun of them in this review of Batch 2 of their Rocky Mountain Rye (Batch 1 was a 16 yo).

As per High West’s website the mashbill for this whiskey was 53% rye, 37% corn and 10% malted barley. Which makes it “barely legal” rye (the minimum requirement to be labeled rye is 51%). However, it is unusual in that it was matured in used barrels. END_OF_DOCUMENT_TOKEN_TO_BE_REPLACED 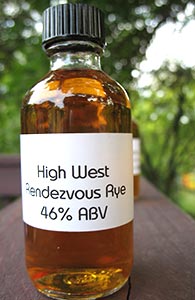 I don’t know very much about rye whiskey and my experience of it is even smaller. I know that to be called rye the mash bill has to be at least 51% rye (analogous to bourbon’s 51% corn mash bill) but I’m not sure if there are more restrictions a la bourbon. I guess I could google it but I don’t want to give the impression that I am an active, resourceful sort. Indeed, I would not have made it in Park City, Utah in the 19th century. That’s a non-sequitur, you think, but the joke’s on you! High West is located in Park City, Utah, which I am assuming was settled in the 19th century (see above for my ambivalent relationship with the idea of googling to find things out).

This rye isn’t distilled there, however. I believe High West’s own distillate is still maturing. In the meantime they are bottling spirits that their website says they “found back East” . Doesn’t that sound nice? They “found it”. It’s like David Perkins was out for a walk through all of the American East and came upon barrels of Rye resting underneath a waterfall, guarded by an army of enlightened beavers who handed it over to him as they recognized that he was the guardian foretold in ancient beaver lore. Or perhaps he stole it and now an army of angry beaver warriors has sworn a blood feud against him and his descendants that only the One–born of beaver and woman–will be able to settle. END_OF_DOCUMENT_TOKEN_TO_BE_REPLACED 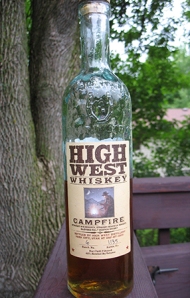 High West is a distillery based in Utah that is yet to bring any of its own distilled spirit to market. While their own spirit matures they have released a number of “sourced” whiskies–a very common practice in the American industry where there are far more faux distilleries than real ones. High West, of course, is a real distillery, albeit not yet bottling their own whiskey, and they have a real blender too who has put together a number of interesting sounding experiments with bourbon and rye. I have not tried any of those (Bourye, Son of Bourye etc.) but this release, the Campfire, caught my attention as it is a blend of straight bourbon, straight rye and an undisclosed peated malt from Scotland. It was part of the American whiskey tasting (traditional and experimental) that I hosted a few months ago, but, frankly, between the classic bourbon glory of the Pappy 15 and Four Roses Small Batch Ltd. Ed. 2012 and the less than classic, less than glorious assault of the Balcones Brimstone, the Campfire got lost. I haven’t tried it since (and hadn’t before) and have almost no memory of it except that I liked it. So, this is my opportunity to review it more carefully.
END_OF_DOCUMENT_TOKEN_TO_BE_REPLACED