Oh no, not another one of those Old Malt Cask 20th anniversary releases! Yes, I’m afraid. so. I’ve already reviewed 57 or so of them and here’s another one. This is a 13 yo Croftengea distilled in 2005 and it has me hoping that it might be almost as good as that 9 yo bottled by the Whisky Exchange last year, or at least as good as the SMWS 15 yo from 2017. Like the Whisky Exchange release, this is from a bourbon cask. Also, most of the other OMC 20th anniversary releases I’ve reviewed have been pretty good—so the odds are good, right? That’s what I told myself anyway when I purchased a bottle a day after going in on this split but before tasting this sample. Let’s see if I’m going to regret that hastiness.

Nose: Big peat, farmy, rubbery—rather Ledaig’ish though without as much of the dead rodent in wet undergrowth. On the second sniff there’s some lemon mixed in there as well. With time and then a few drops of water it gets more acidic and the smoke gets ashier and also more phenolic. END_OF_DOCUMENT_TOKEN_TO_BE_REPLACED

Allah be praised: it’s not another Old Malt Cask 20th Anniversary release! No, it’s not. In fact this whisky has nothing to do with the Laing family. This is a 15 yo Croftengea released last year by the Scotch Malt Whisky Society. Because they are whimsical they gave it the name “Words from Random Phrase Generator”; or maybe it was “What’s cooking?” One or the other.

I got in on this bottle split because a Croftengea came out of nowhere to be one of my very favourite whiskies of 2018 (this one bottled by The Whisky Exchange). I therefore resolved to try as many Croftengeas as I possibly can, leading to this and also the purchase of a full bottle of a Croftengea 13 bottled for….wait for it, wait for it…the 20th Anniversary of the Old Malt Cask line! That’ll be next month; this is now. END_OF_DOCUMENT_TOKEN_TO_BE_REPLACED 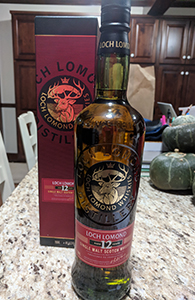 Loch Lomond, a curiosity among Scottish distilleries, has not really been on my radar much. Yes, they make a wide range of malts with all their different still setups (which is what makes them a curiosity) but you can seemingly count on the fingers of one one hand the number of these that anyone has ever gotten very excited about. An Old Rhosdhu 24, 1979 from Murray McDavid was the first one I had that I really liked but that was an independent. The official releases were seemingly solidly in the “ugh” to “eh” range for most reviewers. But then earlier this year I drank this Croftengea—one of Loch Lomond’s peated variants—bottled by the distillery for The Whisky Exchange and I just loved it (see that review for a rundown of Loch Lomond’s variations). Unlike the Old Rhosdhu it was young and seemed likely to better represent the distillery’s current output. And so when I saw the current version of the Loch Lomond 12 for <$30 in a Minneapolis store in early November, I picked up a bottle. A 12 yo malt at 46% and for less than $30—it seemed like a good bet. I cracked it open that night and liked it enough to make it the “fruity whisky” pick for the updated version of my “The Well-Rounded Single Malt Bar” list. Here’s why.  END_OF_DOCUMENT_TOKEN_TO_BE_REPLACED

Loch Lomond, as you probably know, is a rather unusual Scottish distillery. For one thing, they’re one of the few distilleries that produce both grain and malt whisky. For another, they are set up to produce a wide range of distillates. This is not merely because they make peated whisky alongside unpeated but because they have a range of still setups. They have pot stills and continuous stills; and most of their pot stills—including the originals—have rectifying plates in their necks as opposed to the traditional swan neck. If that weren’t enough they also have a continuous still used to distill grain whisky from a 100% malted barley mash. And from all these different setups they produce a wide range of brands (not all are currently available): Loch Lomond, Old Rhosdhu, Inchmurrin, Inchfad, Inchmoan, Craiglodge, and yes, Croftengea. Croftengea is their peated malt whisky. It’s not made in large quantities, I don’t think. In fact, this is only the first Croftengea I’ve ever had.  END_OF_DOCUMENT_TOKEN_TO_BE_REPLACED

Image taken from the Tintin Wiki

Old Rhosdhu is not a distillery, it is a brand of whisky produced at the Loch Lomond distillery (alongside a host of others). Loch Lomond, as everyone who grew up reading Tintin comics knows, was the favourite whisky of both Captain Haddock and Tintin’s dog, Snowy (who is seen enjoying drops from leaking barrels of Loch Lomond in The Black Island in 1937, four years before Captain Haddock made his debut in The Crab with the Golden Claws). Or was it? Since the actual distillery named Loch Lomond was only founded in 1966 this may just be a coincidence. However, as per the Tintin Wiki (yes, there is such a thing) the early panels of The Black Island actually showed the well-known name of Johnnie Walker and were changed to show Loch Lomond only after 1966 (see the image above). I have no idea what occasioned the change but we might say that retconning does in fact make Loch Lomond the favourite whisky of Captain Haddock and Snowy.
END_OF_DOCUMENT_TOKEN_TO_BE_REPLACED