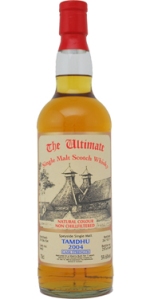 Another Tamdhu. I mentioned in my recent review of the Lombard bottling that I had encountered the nutty/beany note I got on the finish of that whisky in another young Tamdhu, and remembered later that I had saved a large reference sample of said young Tamdhu before finishing that bottle a few months ago. So here is a quick take on that for purposes of comparison (I first tried a very small pour of the Lombard Tamdhu to see if my impressions of that one were consistent, and they were).

This is, in fact, a much younger whisky, and was bottled from a sherry butt by the Dutch budget bottler, Van Wees (the Lombard bottling was from a bourbon cask). They don’t have the strongest reputation but I have not had any bad experiences with their bottlings, and, indeed, have had a number that presented great value for money.

Nose: Somewhat closed at first, as you might expect from the high strength. Spirity, at first, as it begins to unwind, with mild biscuity, toffee notes coming to the fore. After a little while the sherry begins to make its presence felt, but this is no sherry bomb, far from it; in place of raisins there is a resinous winey note (not very unlike a cough syrup). Time doesn’t help open it up. Let’s take a few sips and then see what water does. With a touch of water the biscuity notes magnify; a faint hint of wet cardboard perhaps. Some red fruit and a faint hint of smoke behind it all (very faint). Quite nice.

Palate: Hot, raw and closed. Some malty, toffee notes but not much else peeping through. Water, please. With water this gets really quite salty indeed. Some sweetness too but the overwhelming flavour is of sea salt. Pretty wild.

Finish: Hot, with a faint taste of iron (blood) hanging around. As with the palate, the finish gets salty (and very long) with water.

Comments: I don’t quite remember this getting so salty in the past, but then I have not kept proper notes in the past (hence this blog). I also can’t say that I got very much of that nutty/beany note from this sample, but as that is the one thing I unambiguously recorded when the bottle was on the go, I am going to assume it was there and has dissipated with time. I quite liked the nose on this with water, but the palate was more wild than directly pleasurable. A few more years in the cask might have made this more interesting–then again, given how mild the sherried notes are it may well have been a very inactive cask. The Lombard 13 yo is probably a better whisky but this one is more idiosyncratic and so I am going to give it a higher score for that reason alone.