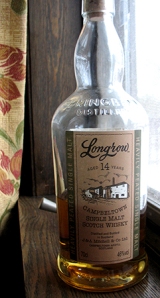 Longrow is the name of the “heavily peated” whisky produced at the Springbank distillery (Hazelburn is the unpeated and triple-distilled whisky produced there). I put “heavily peated” in quotes because even though those words are on the labels, I’ve not found the 14 yo or the 18 yo I have tried to be particularly heavily peated, and the same is true of the few sherry/wine cask Longrows I’ve tried; of all the (not very many) Longrows I’ve tried the now-defunct CV was the smokiest–I have no idea if its replacement (the “Peated”) is as smoky or more/less.

Or, it may be the case that the flavours and aromas I associate with high levels of peat are the pungent phenolic and smoky notes of the peated Islays whereas the peat used at Springbank may impart other kinds of qualities. Be that as it may, this Longrow 14 seems to me to have far more in common with peatier Clynelishes and even some Highland Parks and Taliskers than it does with peated Islay whiskies, or even peated Highland/Speyside malts like those made at Ardmore, Benromach or Edradour (Ballechin) whose smokiness I find to have a barny/farmyardy quality (also true of Ledaig from Mull). This particular bottle is from the 2011 release and was opened in August of 2011. It got to the halfway mark a couple of months ago. I included it in a tasting I hosted for some friends last night and it was quite popular. My notes here are a blend of the abbreviated notes I took last night (when I did not add any water), and those recorded tonight as I finished off the bottle and paid a little closer attention (and added a little water at the end).

Palate: Very similar to the nose with a leathery, musty feel. Mildly smoky–a sharp, acidic smoke. The brine flirts with becoming (malt) vinegar from time to time but never goes quite over the line. As on the nose, fruit develops later. And, as on the nose, water brings the fruit a little closer to the front (still can’t pick what kind of fruit it is). Water also brightens everything up a little. This certainly does not need water to be enjoyable but I’d recommend trying it with some.

Comments: I was a little bit disappointed in this bottle when I first opened it (I was expecting/hoping for more Islay-like peat) but have grown to like it quite a lot. That leathery, briny quality is what I really enjoy about it (and also about its more refined, and far more expensive 18 yo sibling) and it is a relatively unique quality (though also shared with the whisky released under the Springbank label). It is entirely possible that this quality is in fact a kind of smokiness, or described by others as smoke. I believe there is a fair bit of variation in peat levels from year to year, and am interested to see what later iterations are like.