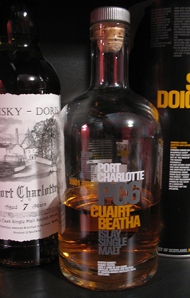 Bruichladdich, as you may know, is one of two Islay distilleries traditionally known for unpeated whisky (Bunnahabhain is the other). This changed after the distillery was purchased and re-opened by Mark Reynier and co. a little over ten years ago (Mark Reynier was pushed out last year after the distillery was purchased by Remy-Cointreau). Head distiller, Jim McEwan put together a number of peated vattings that were part of the roughly 3,750 bottlings that Bruichladdich released over that time to maintain cash flow while they waited for their own unpeated spirit to come online (which it did in 2011). They also started distilling new peated spirit, both the high octane Octomore line (see my review of the 2.1 here), and the more traditionally highly peated Port Charlotte line, the barley for which, I believe is peated to about 40 parts per million (in line with Lagavulin, Ardbeg and Laphroaig).

The first Port Charlotte distillate also reached 10 years of maturity last year and a regular 10 yo release is now out there. On the road to this release, however, the distillery released annual “limited” editions of cask strength Port Charlotte, starting with the PC5, and culminating (?) with the most recent PC 10. These were matured in a variety of cask types. I have all but the PC5, and so far have tried the PC8 (which I loved and finished in short order) and the PC6, which I did not love quite as much, though I did like it. The bottle has been sitting at past the halfway mark for a couple of months now: let’s see what I make of it tonight.

Nose: Quite butyric at first sniff. Smoke, but not an overpowering amount of it. Some sweetness but also a briny, coastal air. Somewhat minerally; not particularly fruity. A little bit of paraffin too. The butyric note dissipates but never quite goes away. Ashy smoke expands with time. With more time a bit of a berry sweetness begins to emerge. And yes, the butyric note never really goes away. Let’s see if water blunts it: yes, it does, but only after a bit. Then the smoke expands, as does a nice mellow fruitiness (stone fruit of some kind). With water it’s really quite Ardbeggy (Ardbeggish? Ardbeggesque?).

Palate: Sweet smoke–quite a wallop of it. Begins to get acidic almost immediately, and a note I usually associate with sherry casks (the taste of iron, as with a bloody mouth) begins to separate: this must be from the madeira casks. The smoke gets dry and leafy with the second sip. Rather one-dimensionsal and not terribly interesting. Water adds a ton of lemon to the smoke and removes the astringent leafy quality. Much better with water: the wine separation goes away too. A little peppery note too now.

Finish: Long, dry, not very pleasant. That leafy smoke is all over the place. Gets quite salty too. Water brings lemon to the finish as well. Tingling, lemony smoke now.

Comments: Yeah, this is not a patch on the 8 yo PC8. Not bad, but nothing you need to go out of your way to try unless you have an interest in tracking this distillate year by year till the regular release–and you can’t really do that either, because each release is from a different configuration of cask types. If you like aggressive, peaty whisky, this will not disappoint; but it is very far from essential. It may be that the whisky has degraded a little in the open bottle–I did like it a little less tonight than I did the last time I tried it–but it may also be that I’m being a little more rigorous tonight; it may also be that I added water much earlier last time: water does improve it a lot, in my opinion.