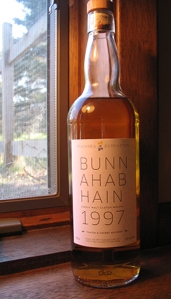 Bunnahabhain have themselves recently gotten into the peated whisky game with the Toiteach (well, 2008, but it has only just arrived in the US). But a lot of peated Bunnahabhain has been and is available from independent bottlers. Presumably, peated runs were/are made for the group’s blending needs (Bunnahabhain’s production capacity is far higher than that of Tobermory, which is the other distillery in the group that produces peated whisky, under the Ledaig brand name). Indeed, a lot of Bunnahabhain, in general, is available from independent bottlers, and older indie Bunnahabhain, in particular, along with Caol Ila, represents a very good value among the Islay distilleries. That’s neither here nor there, however, as tonight, I am tasting a middle-aged Bunnahabhain from a new Swedish bottler, Svenska Eldvatten, about whom I know nothing other than that they make elegant labels for their bottles*. This is from a peated run and was matured in a first-fill sherry butt.

*But wait, they have a website from which I learn that “Eldvatten” is Swedish for “firewater”. Okay, so they make nice labels and don’t take themselves too seriously. How good are they at cask selection? Let’s take a look: 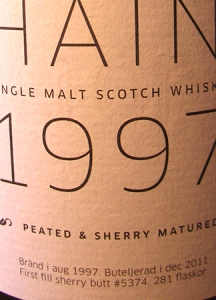 The label notes a run of 281 bottles (at least, that’s what I think “281 flaskor” means), which seems quite low for a sherry butt, even at cask strength. Assuming the cask was split, I wonder where the rest went. Must remember to check the abv of any other sherried Bunnahabhain 14, 1997s I see, so as to not buy the same whisky twice in two different bottles (not all indie bottlers put cask numbers on their labels).

Nose: The first impression is of farmy peat; not smoky but organic: that note I often seem to find of something that was once flesh rotting in the undergrowth (yes, I know: yum!). With time, dry, sharp smoke emerges. Not terribly promising, I have to say. But wait, with time and air the dry smoke gets rounded out with some red berry sweetness. (This is not so very far away from the PC6, though without the eau de puke). A minerally, flinty quality develops as well. With more time, a lot of salt begins to peek through the smoke. After 15-20 minutes the farmy note is much reduced, the smoke is damped down and some caramel and brown sugar begin to appear. For a whisky from a first-fill sherry butt this is no sherry bomb; the sherry notes are quite subtle, actually. Will water amplify the sherry? And will it make it more phenolic? Yea, to the first, nay, to the second: a really rich raisiny sweetness emerges with water, dates too. A little of that farmy note comes back too, but it’s in nice balance with the dark sweetness.

Palate: The first impression is certainly of smoke: and it’s a rich, sweet smoke. But there’s nothing medicinal or phenolic about this peated Islay–reminiscent of a young Ledaig I recently tried, actually. Again, not obviously sherried. With time the smoke gets leafier and a lot of salt shows up. The palate took longer to open up than the nose did. Let’s see if water makes it even more expressive. Well, water does bring out some medicinal notes in the smoke–some ammonia–and makes it leafier still. And there’s some more sweetness, but the sherry is still quite restrained. Paradoxically, water almost makes it feel “hotter” on the palate.

Finish: Leafy smoke, and a LOT of salt. Water just makes it all more expansive and last longer.

Comments: Didn’t start out great, but really grew on me. Needs time. As for water: I think it really works for the nose, not sure about the palate. A bit of a bruiser after the OB 18 but capable of refined conversation too. Of all the major Islay distilleries, Bunnahabhain is the one I have the least experience of. I think I need to do something to address that.