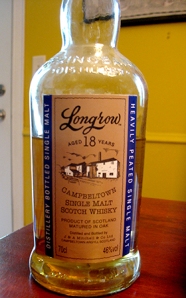 The Longrow 18, like the Longrow 14, boasts the legend “Heavily Peated” on its label, but, as with the younger sibling, it’s not quite what you might expect from a heavily peated malt. For my general views on recent Longrows (and I don’t mean to give the impression that I have had any from earlier eras) see the older review. For now, let’s dive into this one, which is from the 2011 release:

Nose: Austere, briny, flinty. Whiffs of gunpowder, and also something sweet and organic (farmy). Not so very different from the 14 yo. Gets more minerally with time. With more time the farmy/peaty note gets rounder and comes to the front. There’s some apple peels in there too now. A drop of water brings out some lemon/citronella, and some menthol too. Later there’s some sweeter fruit in there too, but I’m having trouble picking what it is–oranges dipped in salt, maybe (do anyone other than Indians eat oranges with salt? I’m sure they must).

Palate: Dry smoke, some acidity. A big wave of brine after that (with coriander, brown mustard seed and apples in the brine). There’s that leathery note again–I think it may be the same note that I identified as gunpowder on the nose. With time the leatheriness, now a little sweeter, comes to the front. Water makes the brine even saltier and brings it back to the front. After a while, the lemon/oranges from the nose makes an appearance on the palate as well and there’s a little more smoke too now (coal stove).

Finish: Doesn’t seem very long at first and the brine is the lasting impression. But with time it keeps tingling on the tongue and the brine takes a smoky turn. Water puts the emphasis back on the brine. At the very end there’s some citrus on the finish too.

Comments: This is a rather austere profile; more austere than the 14 yo even, which has more fruit than this does. This whisky does not offer many direct pleasures and needs time and attention to be fully appreciated. But even that time and attention may not lead to appreciation if you’re in the mood for something robust or loud. A touch of water halfway through brings out all its aspects, I think.