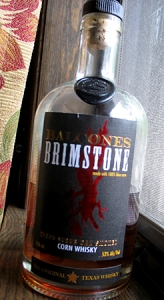 The Balcones Brimstone is perhaps the most disappointing whiskey I’ve had in a while. It’s a corn whiskey from Texas, smoked with Texas scrub oak, and many of the reviews I’d read noted aromas and flavours of barbecue smoke and bacon and barbecue sauce and so forth. As I love all of those things I expected to love this whiskey. I opened it for a tasting of American whiskies that I hosted for the group of friends I do monthly tastings for (see some pictures, and get details of how we do our tastings here). As most of us mostly drink whisky in the Scottish style I put together a tasting that included two highly acclaimed bourbons of different styles (Four Roses Small Batch Ltd. Edition 2012 and Pappy 15, Fall 2011 release) and two experimental whiskies (High West Campfire and the Balcones Brimstone). Based on reviews I’d planned to pour the Brimstone last. However, I opened the bottle two nights before the tasting (I don’t like to use freshly opened bottles for tastings) and really did not like it at all. Raw wood was all I got. I didn’t want the tasting to end on a low note, and so decided to begin with it and put a LOT of space and palate cleansers between it and the rest (we usually take three hours to drink one ounce each of four whiskies). I also hoped that two days of air might take the edge off.

Well, that didn’t end up happening. If anything, it tasted worse on the night of the tasting. And that wasn’t just my view: nine of the others at the tasting thought it was terrible too and the tenth thought it was merely very bad–and we rarely achieve anything approaching unanimity (all but me taste everything blind). We score whiskies out of 40 points at our tastings (10 each for nose, palate, finish and wildcard, with 5 points the “drink again” mark) and usually our low whisky on a night gathers an averaged aggregate of 20-22 points. Such, for example, were the scores of the Glen Moray 12 and the Strathisla 12, innocuous but by no means undrinkable whiskies. Well, the Brimstone got an averaged aggregate score of 9.7 points! (For reference, the Four Roses was the high score that night with 27, the Pappy scored 26 and the Campfire got 20 points–in line with the group’s usual spread.) We all thought it was an interesting whisky to experience but nobody wanted to experience it again. And as if to drive the point home, the three year old daughter of the group members whose house the tasting was held at woke up vomiting violently as the tasting ended.

What I was mostly thrown by was the discrepancy between our response to this whiskey and that of some reviewers I trust and whose tastes are generally not too far away from mine: Oliver Klimek had given it a rave review, and it got a good review, if not a rave, on Scotch & Ice Cream as well. I, on the other hand, thought it was utter swill. That seemed like too wide a gap to accomodate the old de gustibus saw. I figured therefore that batch variation had to be the answer and that I had lucked into the worst possible batch. However, in a recent discussion on a Facebook group for whisky bloggers a number of people (including Oliver and also Joshua Gerson Feldman of the Coopered Tot blog) once again posted rave endorsements of the Brimstone, and Joshua noted that he too had started out disliking it intensely and now loves it. Billy Abbott, who works and blogs for TWE (and also has his own blog,) noted that while he hated it as much as I did he had drunk it alongside others who loved it. So, it didn’t appear that batch variation was what accounted for the difference, and it seemed possible that it might improve with time. So I decided to give it another try and here we are: 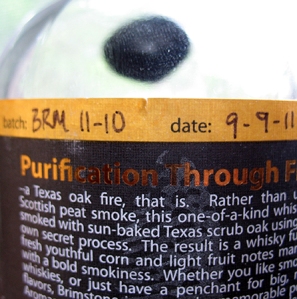 So, Brimstone fans, is this the batch you had?

Nose: Freshly sawn wood; varnish; pine floor cleaner; pencil shavings–to be more accurate, the paint that chips off cheap pencils when you chew them (this takes me back to my childhood but not in a good way). A little hint of maple syrup but the raw wood dominates. Gets a little more sour with time–something like balsamic vinegar mixed with cheap white vinegar; maybe a touch of soy sauce. Later, notes of vinegary barbecue sauce, but that goddamned raw wood never goes away–it’s like being trapped in the lumber section of a Home Depot. Water dials the wood down a tad but the Pine-Sol is still there. A little inkier too now, and I am finally getting some bacon.

Palate: Ugh. It leads with the freshly sawn wood and transitions into cheap wine vinegar. Maybe some concentrated beef stock in there too. Let’s see if water improves it tonight–it certainly can’t make it worse, can it? Okay, water does make it palatable. The raw wood recedes and the beef stock trumps the bad vinegar. More brown sugar now and better quality barbecue sauce than first appeared on the nose. Some umami flavours now too: the liqueur from soaking dried shitaake mushrooms in hot water.

Finish: Mostly tastes like a cheap pencil. Mercifully, it’s not as long as it threatens to be. Water improves the finish as well and keeps the beef stock/soy sauce note going. The pencil shaving note comes back later and sticks around for a long time.

Comments: I’m afraid that while the nose has registered some mild improvement in the last two months the palate without water is as nasty as ever. It’s as though someone tried to make vinegar infused with pencil shavings, but couldn’t even be arsed to use a decent vinegar. Neat, it’s best served to enemies. With water it did improve markedly tonight (or maybe I was just excited that I could finish it with water). I can’t say it turned into something I’d want to drink on a regular basis but it did turn into something different and drinkable enough to bust out every once in a while; and I can see how some good vermouth, ice and lemon peel (but hold the bitters) might bring out the best in it. Okay, I’ll set it aside for another two months and check again.

But I do think that cask variation must be in play: neither Oliver Klimek nor Scotch & Ice Cream mention the overpowering raw wood that’s all over the nose, palate and finish in this bottle. I see that the Scotch & Ice Cream review, at least, was based on an officially provided sample from a different batch (BRM 12-2).