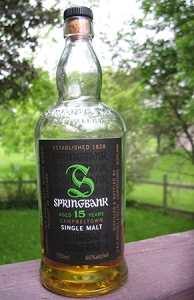 Another Springbank, and finally one that is easily available in the US. It’s hard for me to remember exactly but I think the Springbank 15 may have been one of the first whiskies for which I paid in excess of $60. I knew nothing about Springbank at the time; I barely had a sense that Campbeltown was a traditional whisky region in its own right. At the time I was buying bottles on spec to be able to taste a wide range of whiskies, and this was one of the first expensive bottles that I replaced as soon as I finished it. (I think it may even have been my gateway bottle to buying more expensive bottles–I think the Highland Park 18 may have been next.) At any rate, ever since I first bought it I’ve always had one on hand. There’s some batch variation from year to year, but I don’t think I’ve ever had one I did not like. This one, in fact, from 2010, was a little disappointing when I first opened it, but time and air did wonders for the bottle.

Nose: Right off the bat there is a sweet fruitiness, that’s almost berry-like, but it is displaced quickly by the trademark Springbank leathery brine. There’s some savoury gunpowder too. In a minute or so, the salt expands quite dramatically. The fruitiness never quite goes away, but after a while I’m now getting orange peel rather than berries. A nice lick of dry smoke in there too. With time the orange peel and leathery brine are in perfect balance. Gets a little sweeter and muskier with time.

Palate: Briny, leathery. Then some minerally, peaty sweetness and that gunpowder. A large wave of fruit (oranges, apricots) crashes as I swallow, splashes salt everywhere and dissipates like it was never really there. The brine/salt is very much the featured performer after that—some pepper playing a supporting role too. With time that wave of fruit in the middle gets a touch tropical and hangs around longer, intermingled with some gunpowder.

Comments: I did not feel the need to add any water tonight. I don’t know how the true sulphur-phobe would feel about this whisky but having grown up eating things laced with rock salt (and as kids we would actually suck on lumps of rock salt) I find this savoury gunpowder note to be quite literally mouthwatering. That said, when I first opened the bottle the gunpowder and the brine were very dominant. With time, the other qualities have come to the fore more.

Apart from the fruitiness that gets more prominent with time this Springbank 15 is quite close to the Longrow 14 made at the same distillery, which I guess is not a surprise. I don’t think this is a profile that is likely to be universally beloved, but it’s rather unique among contemporary Scotch whiskies. Worth a try for that reason alone.