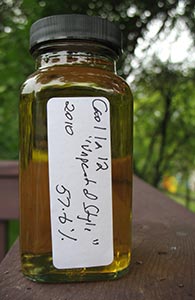 Caol Ila, like a number of its Islay brethren, is known for its peated malt. The distillery, which has a tremendous production volume, has apparently also produced for quite some time an unpeated “Highland” variant of its malt for Diageo’s blends, and a few years ago this unpeated Caol Ila began to appear among Diageo’s annual special releases. As far as I know, there have been in this series three releases of an 8 yo (2006, 2007, 2008); one of a 10 yo (2009); two of a 12 yo (2010 and 2011); and most recently a 14 yo (2012); and another is expected this year.

I am tasting the 12 yo from 2010 today, and it is not my first time. Tonight’s tasting is of a reference sample saved from a bottle that perished a while ago. I can tell you before I begin the review proper therefore that as “unpeated” malts go, this is pretty peated. I don’t believe there’s been official word on this but consensus on the WhiskyWhiskyWhisky forums seemed to be that having been distilled at the end of the distillery’s season it likely picked up a peaty character from the pipes etc.; it can’t be from residual peaty spirit in the wood as the label says this is from first-fill bourbon casks. Whatever the reason, this is not the Caol Ila “Unpeated” to go to if you really want to taste an unpeated Caol Ila.

Nose: The first note is sweet peat followed by green olives and olive brine. Very coastal–humid sea air, kelp. Gets a little more acidic with time but there’s also more vanilla; in fact, it gets quite creamy after a bit. With yet more time there’s a nice interplay of the lemon and green olive notes. A few drops of water bring out some chilli pepper and also turn the lemon into preserved Meyer lemon.

Palate: Peat leads here too, and there’s dry smoke as well. And all the other good stuff from the nose comes right after: olives and brine, getting increasingly salty with leafy smoke all around. With time it gets more lemony and those wet pebbles/stones I associate with Caol Ila are out as well. Not quite as unctuous as the nose seemed to indicate it might be but very nice mouthfeel. Quite drinkable at full strength. Water makes it more acidic and also brings out a greater ashiness.

Finish: Long. Dry smoke and some acid. Gets more lemony with time too and there’s also a lingering bitterness. More ashy with water and that bitter edge is more pronounced (not unpleasant though–more of an interesting counterpoint).

Comments: Certainly not unpeated but very, very nice. It’s mostly gone now but I would recommend it highly if you can find it below $100 (especially if you like Caol Ila a lot). I think I prefer the nose with water and the palate without, which presents a bit of a conundrum.