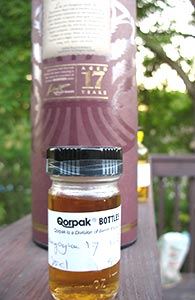 Glengoyne is in the Highlands (barely): the line dividing the Highlands from the Lowlands apparently runs in front of the distillery and the whisky is matured in warehouses in the Lowlands. This is, however, deeply uninteresting so let’s let it lie. Glengoyne prides itself on using only unpeated barley and are also noted for extensive use of ex-sherry casks for maturation. I’ve not had very many Glengoynes and the only one I’ve really liked a lot is the now discontinued (of course) Glengoyne 12 CS. I acquired a sample of this 17 yo in a swap. I tasted the first ounce soon after receiving it and liked it well enough to pick up a bottle while it was still deeply discounted in California. I decided to drink the second ounce now and review it as I plan to open the bottle soon and it seemed like a good idea to commit myself to notes on the sample and then see how the freshly opened bottle compares.

Nose: Gentle sherry and malty notes together. Some orange peel and mild notes of raisins but also a grassy quality. Gets a little spicier/yeastier with time and there’s also notes of chicory and bark; in fact, gets quite mossy/earthy with time. With more time the earthy, vegetal quality integrates nicely with the raisiny notes. The rasin and citrus notes keep expanding and are joined eventually by a nice toffee sweetness. With water the vegetal notes become more apparent again.

Palate: The mossy/earthy/mushroomy note makes the first impression but transitions quickly to raisiny sweetness and then a dry, acidic note that turns astringent. With time there’s some brine between the sweetness and the dry, acidic stuff. Water dials back the acidic/astringent quality and emphasizes the malty sweetness.

Finish: Medium. Sour and yeasty. Gets saltier with time.

Comments: There’s interesting development on the palate but I’m not sure it’s all too my taste. The sour/astringent note on the finish certainly isn’t (I hate to mention the dread word “sulphur”). However, the nose is rather nice. Water is better for the palate than the nose. I’ll be interested to see what I make of a freshly opened bottle. Soon.

Thanks to bpbleus for the sample!