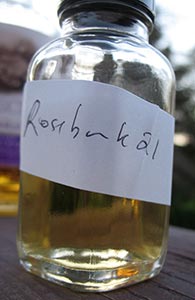 Well, if this Rosebank doesn’t do it for me I think it’s pretty likely that Rosebank may just not be my thing, or that its charms somehow elude me. This is a bit of a cheat of a setup because I actually already know I like it a lot. I tried some of this at the whisky blowout birthday party I attended in St. Paul earlier this month. Still, that was not a very large pour and in a far more casual context and so I’m very glad that Rich generously shared some more for me to review. (This last bit is going to be a bit of a refrain for a while.) Let’s see what I make of it tonight when I have far more time and undivided attention to give to it.

Nose: Strong lemon, edging into citronella, with a woody note that grounds it. With time a fruity note develops, a little musky, a little bright and citrussy (pineapple perhaps, maybe some melon? certainly some lemon). More malt too now and some cream/vanilla. With time gets really quite intoxicatingly fruity (and sweeter now) without being over the top. Water brings the lemon back but it’s lemon curd now. After a minute or so the sweet, creamy note is back in full force but there might be something peppery in there too now.

Palate: Bright lemon first, but then an increasingly tropical fruity expansion–more on the brighter end of the spectrum (pineapple, kiwi, dragon fruit). Some polished wood under it too and lemon-vanilla crumble. Much more vanilla on the second and third sips. Water pushes the vanilla back and brings the lemon back up to the top; there’s just a hint of papaya in the fruit cocktail too now. Should have added water earlier.

Finish: Medium. The lemon is the top note here too, but the musky fruit sticks around too, sprinkled with little sugar crystals and a little woody spice. With more sips the vanilla sticks around longer. As on the nose and palate, water resets the lemon-vanilla balance in favour of the lemon.

Comments: My streak of middling Rosebanks seemed at first like it was at an end. I loved the nose and the palate at first–and loved the unexpected fruit cocktail–but the sweetness got a little cloying for me (though water does tamp that down noticeably). This is very good indeed, and the best of the five I’ve had so far, but it’s still just short of exceptional. Yes, I liked it a little bit less tonight than I did on my first go-around with a smaller pour. On the whole, there’s not a terrible lot separating this from the Signatory 16 yo from 1990 (coincidentally, all the Rosebanks I’ve had are from 1990) and I’m sure that was a lot cheaper.

Thanks to Rich for the sample!