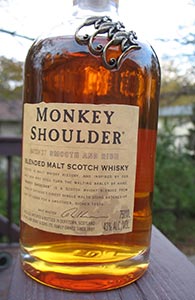 Monkey Shoulder is a vatted/blended malt from William Grant & Sons, the family owned company who are the proprietors of Glenfiddich, Balvenie and (the now defunct) Kininvie, and the bottlers of various malt-grain blends besides. This, as I say, is a blend of malts from their three distilleries*; and until very recently was of note, among other things, because it was the only form in which Kininvie (the smallest of their three distilleries, producing for their blends till 2010 when it was closed) could be said to be available in malt form, albeit blended with its better known siblings. Recently, however, a fairly old Kininvie single malt has suddenly seen the light of day. I’m not sure what brought that on or what the fate of this vatted malt may be if the remaining stock of Kininvie is also now to be set aside for release as single malt. Given the low price of this bottle (<$30 in most places in the US), it seems likely that Kininvie forms the bulk of the vatting and there can only be so much of it to go around.

It's an attractive bottle, even if the whisky inside is of a suspiciously bronzed hue, and reports are generally good. I've been looking forward to try it for some time now.

*Note: See the comment below from Florin with a link to another blog where a brand ambassador is quoted as saying that Monkey Shoulder was only originally composed of malts from Glenfiddich, Balvenie and Kininvie and has since contained other Speyside malts as well. I guess that means Kininvie’s closure should have no effect on the future of the blend. Now whether future iterations will be very like this one is therefore hard to say.

Nose: Honey and toffee with light caramel come wafting out of the glass. Then a malty, grassy note emerges underneath along with some toasted wheat/wood. Some light orange peel and clove and nutmeg after a bit; with more time the orange peel is far more assertive. Water doesn’t really do it any favours, mostly bringing out a dusty, salty note.

Palate: Light but not particularly thin. Very much as on the nose: the honey/toffee/caramel combo are the story on the palate as well. And just as on the nose, there’s citrus too after a while; not as much of the spice though. With time some woody/chicory notes. Water knocks the balance off a bit.

Finish: Medium. Gets a little metallic and bitter; later this goes away and there’s a faintly spicy woody quality instead..

Comments: Not a whole lot of character but very nice (but pass on water). And comparable, I think, to a number of single malts of similar profile that cost more. A good bottle to have on hand for easy drinking or for guests who aren’t that into single malt whisky as it could function very well as a gateway malt–especially to the sherried Speyside style. That said, the finish is a bit of a letdown–though this could very well be due to this being a freshly opened bottle. I’ll be interested to come back to it again soon.